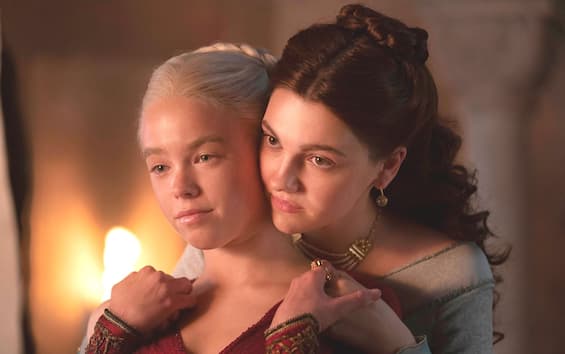 A few more hours and the first episode of House of the Dragon, a spin off of Game of Thrones, will be on the air. The appointment is for 3 am on 22 August Italian time, exclusively on Sky Atlantic and streaming only on NOW, simultaneously with the broadcast in the USA, in the original language and subtitled, in rerun at 22:15, and from 29 August with the Italian version at 9.15 pm. Always in double audio, the ten episodes will obviously be available on demand as well. Among the main characters of the series is Alicent Hightower, played Olivia Cooke and, in the younger version of her, by Emily Carey. Let’s find out who she is.

Alicent Hightower is a member of the Hightower family, daughter of Hand Knight Otto Hightower and second wife of King Viserys I, with whom she will give birth to four children: Aegon II, Helaena, Aemond and Daeron. Alicent is described by George RR Martin as precocious at 15 and intelligent and lovable at 18.

VOICES ABOUT THE RELATIONSHIP WITH DAEMON

When Viserys marries Alicent, many disagree. In fact, rumors circulate at court that the girl is not unharmed, that she has already lain with the king before marrying him and that she, above all, she has had an affair with Viserys’ brother, Daemon. To put this rumor around is the court jester Mushroom, according to which the friction between Otto Hightower and Daemon Targaryen would have originated right after this episode.

Initially, Alicent has a great relationship with her adopted daughter Rhaenyra. Things change after the birth of Aegon, Helaena and Aemond. At that point, Alicent begins to want her children to override Rhaenyra in the lineage to the Iron Throne, and the relationship between the two becomes more strained. Despite this, Olivia Cooke stated in an interview that if the kingdom were in the hands of the two, she would live in complete peace: “There are moments when Rhaenyra and Alicent are surrounded by really stupid male characters. And we know very well that if these men went away and it was just the two of us, the kingdom would be safe ”.

The factions supporting Alicent and Rhaenyra are identified in George RR Martin’s novels with two colors: greens and blacks. The reason for this chromatic division is to be found in the great tournament held in King’s Landing to celebrate the fifth anniversary of the marriage between Alicent and King Viserys. At the inaugural banquet, the queen appears dressed in green, while Princess Rhaenyra wears the colors of the Targaryen: red and black. For the record, the tournament is won by blacks over greens.

Olivia Cooke, actress who plays Alicent, is 18 months younger than Emma D’Arcy, the titular actress of the role of Rhaenyra as an adult. A reverse age difference compared to that of the two characters, since Rhaenyra is younger than Alicent. The problem, however, does not arise: because in any case Alicent is too young to be able to look like Rhaenyra’s biological mother and because Martin tells us that even at 40 he seems to be younger, while Rhaenyra appears older than her real one. age.

Olivia Cooke compared her Alicent to the Cersei Lannister played by Lena Headey in Game of thrones. “I love this comparison because Cersei was my favorite character – said the actress – Alicent has a dark side to her, but in reality all her efforts are aimed at what she thinks is right, even if out of place.”