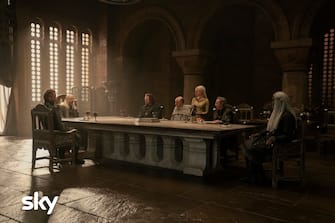 The Stepstones are at war with the kingdom. Corlys is concerned about the situation and calls for more attention to be paid to the war against pirates

WATCH THE VIDEO: House of the Dragon, return to Westeros. The special

Rhaenyra intervenes by proposing to send dragons and volunteering for battle. Viserys instead sends her to choose the new commander of the Royal Guard. She chooses Criston Cole

House of the Dragon, the photos of the first episode

House of the Dragon, plot and review of the second episode

The bond between the two seems to be growing day by day. The King asks Alicent not to talk about their encounters with Rhaenyra

House of the Dragon, plot and review of the first episode

House of the Dragon, 10 reasons to see the TV series

House of the Dragon, cast and characters from the Game of Thrones prequel

Rhaenys asks Rhaenyra if she isn’t worried. Then he reminds her that it is unlikely that the males of the court will ever accept having her on the throne

House of the Dragon, audience record for the first episode

Rhaenyra, however, remains firm and convinced and replies with personality to her father’s cousin: “They did not want you, the queen who was not”

House of the Dragon, over 1 million tweets for the first episode

While in his quarters with Alicent, Viserys is alerted to the theft of a dragon egg

House of the Dragon, there will be a second season

It was Daemon who stole it. The egg is the same one that Rhaenyra had chosen for little Baelon. An affront that Viserys cannot tolerate. The King is ready to leave for Dragonstone, but Otto, as his Hand, prevents him, worried about the King’s life, volunteering to lead the expedition.

House of the Dragon, the cast at the premier of London. PHOTO

Arriving at Dragonstone, Otto, Criston and their platoon ask Daemon to retrace his steps, renounce the marriage with the concubine Mysaria and return the egg.

Daemon, however, does not intend to give up, also thanks to the dragon that protects him

To unlock the situation is the surprise arrival of Rhaenyra, who arrives on the saddle of Syrax, her dragon. The Princess talks to her uncle, challenges him to kill her, and obtains her surrender and the return of the egg.

Returning to King’s Landing, Rhaenyra is reprimanded by her father for disobeying her orders. But when the King discovers that thanks to her Daemon has returned the egg without bloodshed, Rhaenyra is forgiven.

Viserys talks to Rhaenyra and confronts her about getting a wife again. The Princess seems to understand the King’s duties to the realm

Called the small council, Viserys announces his decision: he will marry. The bride, however, will not be Laena Velaryon but Alicent Hightower

Rhaenyra, shocked by the King’s announcement and feeling betrayed by her father and her friend, leaves the hall without saying a word