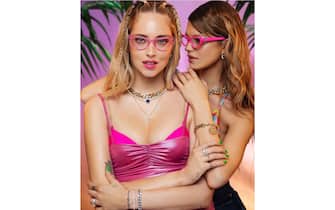 From sand to asphalt, the bikini has become a garment also perfect for the city and the stars of fashion and entertainment have officially adopted it in the daily wardrobe. The bikini top is ubiquitous in summer looks, as a substitute for underwear or as a simple top. Here is the version of Chiara Ferragni with a garment from the Chiara Ferragni Brand beachwear line

WATCH THE VIDEO: The costumes chosen by celebrities for summer 2022

Also Veronica Ferraro has chosen to complete her Louis Vuitton look with a triangle top, a classic beach bikini, exposed. Here is her look for the brand’s show in San Diego last May

Gigi Hadidone of the undisputed queens of contemporary street style, showed off a one-piece swimsuit as the most evident piece of a look with which she appeared in New York last May, demonstrating that even the most diverse garments can be truly versatile with the right styling

Perfect interpreter of the rediscovery of the major trends of the early 2000s, Elodie made the bikini in the city a distinctive element of her recent style. Here she is in one of the many looks shown on her Instagram profile complete with pants with large pockets and exposed briefs

Also Bianca Atzei she chose the exposed bikini, in this case, coordinated with her bodycon suit with lurex motifs. Her styling is curated by Paola De Cegli

This season, in particular, the bikini has conquered its place on the most photographed stages in the world. This is one of the looks of Vanessa Hudgens at the latest MTV Movie & Music Awards. Top and miniskirt with safety pins clearly inspired by Y2K. All Versace with styling by Jason Bolden

The most famous bikinis worn by the stars, from Madonna to Belen. PHOTO

Eva Longoria for the recent premiere of Gordita Chronicles in Los Angeles she opted for a monochromatic look by Giuseppe di Morabito consisting of a longuette pencil skirt, short jacket and bikini-style top in evidence. Worn with strings wrapped around the belly, it is a doubly trendy choice

One-piece swimsuit vs bikini, what the stars of yesterday and today prefer. PHOTO

Elisabetta Gregoraciin a Verdissima total look, demonstrates that in summer the pairing of a bikini top and pajama-style relaxation pants is a winning and always chic choice

The one-shoulder is officially back in beachwear as well for a few seasons. Here is an example of a perfect top and jeans match suggested by Noemi

Already at the beginning of the new millennium, the stars had understood that the bikini top could be an excellent garment to wear in places other than the beach. Here you are Halle Berry in New York at the premiere of X-Men. For her, costume coordinated with the pants and some shots that have remained in the annals

Speaking of trendsetters, here Rihanna in 2005 with gold swimsuit and decorated jeans on the Wembley stage for the T4 Poll Winners’ Party

In 2013 Miley Cyrus she sported a black bikini under a see-through shirt for the Teen Choice Awards, a choice not without elegance

Moving back the hands of time even further, another famous bikini in the city has been worn by Gwen Stefani, fashion icon and pioneer of various trends, especially in the heyday of No Doubt. The singer stunned the MTV Video Music Awards audience with a look that included an unusual faux fur bikini