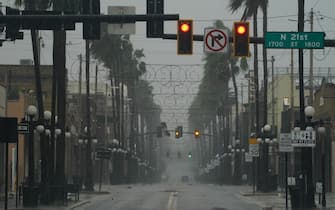 Hurricane Ian, after causing casualties and damage to Cuba, hits Florida. It is classified as category 4 but the US weather service explained that in the last few hours it has strengthened with winds of 155 miles per hour (250 km per hour), just 2 miles below category 5, the highest. The National Hurricane Center called it “extremely dangerous” and added that it is expected “to cause a wave of storms, catastrophic winds and floods”

Ian seen from the satellite, as it approaches Florida. In Cuba the hurricane caused at least 2 deaths, but the budget could worsen: the American border police have made it known that 23 migrants they disappeared off Florida after a Cuban boat sank

Cities like Naples (21 thousand inhabitants) e St. Petersburg (264 thousand), on the coast of the Gulf of Mexico, with “landfall” (the point of impact) in the Charlotte County. For now, the Tampa area appears to have been spared from a direct head-on collision. Catastrophic rains are expected, with a sea level rise of 3.6 to 4.9 meters on the coastal areas between Punta Gorda and Fort Myers, which are between Naples and Sarasota

Hurricane Ian, 2 deaths and serious damage to Cuba. Now it is heading for Florida

Over 2.5 million people received the mandatory evacuation order, although there is no law that can force the inhabitants to leave. Republican Governor Ron DeSantis, for whom the hurricane is a test case not only for re-election in Midterm but also for his likely run to the White House, said in the past few hours: “Now it’s too late to evacuate properly. sure, it’s time to stay sheltered and prepare for the storm ”

Climate change, the most damaging weather events of 2021. PHOTO

“I made it clear to the governor” of Florida and “the mayors that the federal government is ready to help and will do so in any way possible“he said instead Joe Biden, reiterating its frontline commitment to assisting Florida in the throes of Hurricane Ian. “Experts say it could be devastating. My administration is ready to help Florida in any way, we are here and we will do everything possible”, said the US president in recent days, inviting all citizens of the state to follow orders. evacuation

Ian endangers the Southwest Florida, a highly populated tourist area, especially by retirees and “snow birds”, the Americans who winter in the Sunshine State. After striking Cuba leaving the Caribbean island in the dark, the hurricane charged with energy in the warm waters of the Gulf of Mexico before crashing into Florida.

On the state it came with winds at 155 miles per hour (250 km / h), just 2 miles below category 5, the highest on the Saffir-Simpson scale. Only two hurricanes of this category have hit the US in the past 30 years, both in this state. The damage could be massive: flying roofs, collapsing walls, blackouts that can last weeks or months, uninhabitable most of the affected areas. With torrential rains, strong winds, floods and sea level rise up to 4-5 meters

Over the weekend, Ian will also touch Georgia and South Carolina, hopefully with less violence. The first images from Florida came from the very long bridge shaken by powerful gusts of wind on the archipelago of Key West, the southernmost point of the United States. But then the eye of the hurricane headed north, heading towards Naples, Bonita Springs and Fort Myers. Tampa Bay saved for now, while all Disney airports and resorts have closed (empty supermarket shelves in the photo)

Ian’s passage has already resulted in deaths and damage in Cuba. The hurricane, then category 3 on the Saffir-Simpson scale, struck the western regions with a still provisional death toll of two, the complete paralysis of the electricity supply throughout the national territory, serious damage to the building infrastructures and crops and tobacco crops. The confirmed victims are a woman and a man who died from collapses in their homes

Various pylons of the electricity grid have been knocked down from the force of the wind and heavy rains, with gusts of almost 200 km / h. The president of the republic Miguel Díaz-Canel went to the province of Pinar del Rio, the most affected on the island, to meet the local authorities and encourage the population who had to face “a terrible experience”. Via Twitter, the head of state reiterated that “the damage caused by Ian is enormous and it has not yet been possible to quantify it. Aid is already arriving from all over the country”

Díaz-Canel confirmed that the province of Pinar del Río is the “territory that has been most devastated”adding that, at the same time, the provinces of “Havana, Artemisa and Mayabeque, and to a lesser extent the Isle of Youth” present emergency situations

How hurricane names are chosen