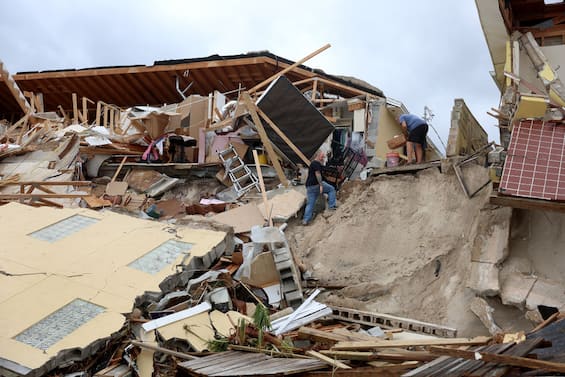 It left damage and devastation as it passed. Hurricane Nicole, now downgraded to a tropical storm, hit the east coast of Florida where at least two people were killed and over 300,000 homes and businesses were left without electricity. According to the monitoring site Poweroutage.us, they were hit by blackouts just after 5 am local time, about two hours after the hurricane touched down on North Hutchinson Island, about 220 km north of Miami. Despite having diminished its power, according to the National Hurricane Center, Nicole continues to worry due to dangerous storm surges and rising ocean waters, as well as heavy rain and gusts of wind.

Extensive damage to the coast

“We are ready and resources are available for post-storm needs,” Florida Governor Ron DeSantis said at a news conference. “It’s still a big storm and it’s hitting a large part of the state.” Several beach houses collapsed in the upscale Wilbur-by-the-Sea community, just south of Daytona Beach, and many more hovered after waves from strong winds dug the foundations of the buildings. The houses had already been abandoned and no one was injured, Volusia County Sheriff Mike Chitwood said. About 150 residents of two condominium complexes on the coast were evacuated on Wednesday as the buildings were in danger of collapsing due to the crumbling dams, Chitwood said.