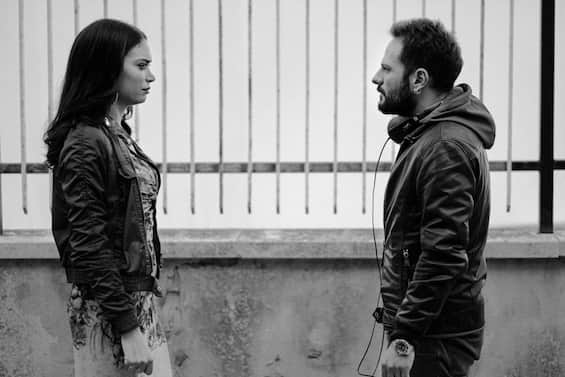 The trailer for I eat your heart. Without colors, like the whole film and like the story it tells. A story of opposition, in a crime-ridden Puglia where you always have to take sides. The film is a bit of a western and a bit of a gangster movie. It tells the story of a hidden Gargano, where the sun beats but does not heat and where perhaps not even love can grow.

I eat your heartthe plot

Very loosely based on the book of the same name by Carlo Bonini and Giuliano Foschini, I eat your heart tells the story of a dangerous passion between members of two rival crime families. Marilena and Andrea are in their own way epigones of Romeo and Juliet, though they are placed in a harder and more archaic context. He is a Malatesta, she is the beautiful wife of the Camporeale boss. They shouldn’t even make eye contact with each other but love doesn’t give a damn about the rules, even those that seem more dangerous to break.

The passion between Marilena and Andrea rekindles a feud that has never really been overcome in a world where the only law is that of an eye for an eye, a tooth for a tooth. But Marilena, disputed and hindered by everyone, will fight anyway to be able to follow her path.

Elodie’s debut in a crime story made in Puglia

The protagonist of the film has the features of a debut actress but certainly not new to performing on stage. Elodie, the singer of several hits (last in chronological order Tribalwhich accompanied us all summer), is certainly one of the greatest curiosities of I eat your heart. Growing up in a difficult neighborhood, the Roman artist will probably also insert a little of her experience of her in the interpretation of a strong woman capable of fighting for what she cares about most.

At his side, in the role of the boy he loves, we find Francesco Patané (already seen in the film about D’Annunzio The bad poet). They are the couple at the center of a story that has many characters, played by great actors of our cinema. From Tommaso Ragno, in the role of his father, to the extraordinary participation of Michele Placido, there are many great names involved in this ambitious criminal fresco set entirely in Puglia.

In competition in the Horizons section of the Venice Film Festival 2022, I eat your heart will hit theaters on 22 September. The film is directed by Pippo Mezzapesa. The Apulian director and screenwriter, already author of popular shorts and documentaries, had already compared in the past with the fictional feature film with films such as Ithe land of unhappy brides And My good.