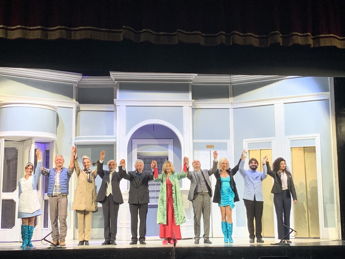 An advice, valid in politics as in family life, at work or in social relations? “If you’re going to tell a lie, tell it big”. At least if you want to follow the recommendation of Ray Cooneyauthor of the vaudeville-style comedy of the same name, staged in the Italian version signed by Iaia Fiastri until December 11 at Parioli theater in Romewith a leading quintet represented by Paola Quattrini, Gianluca Ramazzotti, Antonio Catania, Paola Barale and Nini Salernooriginally directed by Peter Garinei taken up by Luigi Russo.

Already a theatrical workhorse of Johnny Dorelli with Gloria Guida and Paola Quattrini herself, the comedy ‘Se devi dire una lie, dilla grossa’ is now being revived after more than thirty years of Italian life, about twenty years after the edition in which it starred Gianfranco Jannuzzo, as well as on the centenary of the birth of Pietro Garinei. It all revolves around the clumsy attempt of a government man to have an extramarital affair in the hotel where he arrived with his wife, a hotel also frequented by one of his political opponents and where his mistress’s husband will also fall unexpectedly. If then the organization is entrusted to a naive ‘handbag’ secretary, untangling the ball of yarn without suffering damage will be a really difficult operation, bordering on mission impossible.

“Resuming this show and re-proposing it on stage is like holding a very secure bill of exchange, both for the audience and for the acting company and for the theater that hosts it – underlines in the director’s notes – The solid comic structure that characterizes the comedy of Ray Cooney which went around the world and which Garinei himself then staged with enormous success, is a great comeback for our theater market”. The staging is inspired by the original one signed by the award-winning company Garinei & Giovanninieven with the revolving scene to represent the various rooms of the hotel which form the backdrop to the very intricate plot, increasingly tangled as one tries in vain to unravel the threads.