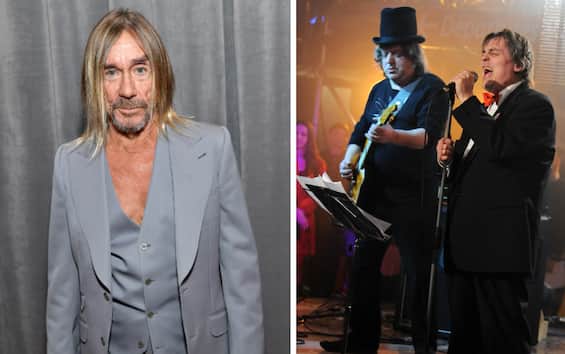 Iggy Pop praised the Skiantos during his hugely popular radio program broadcast on the BBC, and aired a hit by the Bolognese band led by the late Roberto ‘Freak’ Antoni, or “Eptadone”.

“This is a crazy song, in my opinion, this will beat them all,” said Iggy Pop. “These are the Skiantos… The Skiantos are a demented Italian punk band formed in Bologna”.

It happened in the episode of 31 July: the musical icon introduced the piece by Roberto ‘Freak’ Antoni proposing it as a pop classic, in the midst of songs of milestones such as Nina Simone, Howlin Wolf and his own Stooges, as reported by Pierfrancesco Pacoda, music critic, essayist as well as an icon of local music himself (for those unfamiliar with him, let’s talk about the essayist to whom we owe comprehensive music history texts such as real encyclopedias, for example Italian hip hop, Power to the Word And On the routes of the Raveas well as the book I, dj written together with Claudio Coccoluto).

“As a planetary renowned artist like him has discovered the overwhelming charge of Eptadone, it is part of his ability to immerse himself not only in the present, but also in the past of youth sound cultures, but he hardly got unbalanced, presenting a song, in praise so passionate “, notes the music critic Pierfrancesco Pacoda, who adds:” A sign that that sound, born in the cellars of via San Vitale, then developed into a first record ‘Inascoltable’, which, as Skiantos have always remembered, was recorded in one night by a group of people, many of whom had met for the first time on that occasion, is still very topical ”.

You can listen to the song “Eptadone” by Skiantos praised by Iggy Pop at “Iggy Confidential” on BBC Radio in the video found at the bottom of this article.

The words of Iggy Pop relating to the Skiantos

“This is a crazy song, in my opinion, this will beat them all … These are Skiantos … Skiantos are a demented Italian punk band formed in Bologna in, I thought it wasn’t true because it’s crazy, in 1975! from their second album ‘Mono Tono’. They are Skiantos and now I leave you very, very capable with ‘Eptadone’ in their hands. ” These are the words steeped in enthusiasm with which Iggy Pop warmed the audience of his BBC radio show, “Iggy Confidential”.

Despite the death of Freak Antoni (pseudonym of Roberto Antoni, also known as Beppe Starnazza and Astro Vitelli) in February 2014, the Skiantos are still in business, reunited in 2016 two years after the legendary singer passed away.
And it is not just a question of being still in business: there is a great deal of attention around them, as Pacoda points out in his article recently published in the symbolic newspaper of Bologna, the Rest of the Carlino. The Skiantos are also part of the symbols of the capital of Emilia-Romagna, and they have not died out at all after that 12 February 2014.
To witness the boom of this legendary Italian group is the sold out recorded at the concert in Rimini, held last July 26th. On that occasion the band put to music for the first time the four texts that the writer Pier Vittorio Tondelli in the 80s gave to his dear friend, Freak Antoni. Those lyrics were never used by Antoni and, after his death, they were found among the cards left by the singer. Now they have become part of an album that will be released soon.

Reprinted the book on the history of the Skiantos

Recently the book entitled “A Story Like This Never Was Before … and Will Never Be Again” was reprinted once again. This is the volume by Gianluca Morozzi and Lorenzo ‘Larry’ Arabia which traces the musical adventures of the Bolognese band. It is proposed as an exciting journey backwards that reconstructs the history of the Skiantos starting from the insane origins of Bologna registered in 1977 up to the present day.

After the departure of Freak Antoni, the band is led by Dandy Bestia, the guitarist and founding member of the group.
“Dandy Bestia continues to fill the spaces where he performs, in front of an audience where their 70-year-old peers happily mingle with their children, a very rare case of generational sharing”, writes Pierfrancesco Pacoda. “If today we are, according to the 2006 Unesco recognition, ‘Creative City of Music’, the merit is also due to a scene that, without attention to the market and in absolute independence, is now celebrated by one of the most listened to BBC programs” .

You can hear the Skiantos song “Eptadone” praised by Iggy Pop at “Iggy Confidential” on BBC Radio in the video below.