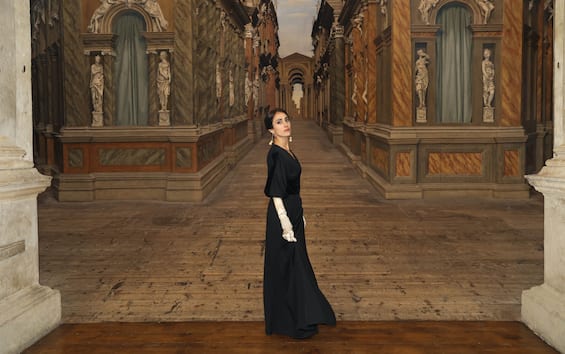 The fifth season of the television series is underway Illuminate, the fifth chapter of the documentary project that tells exemplary stories of four great protagonists of the twentieth century. This time it’s up to Lina Wertmüller, Maria Callas, Wanda Ferragamo and Franca Valeri, protagonists of unpublished and exclusive stories.

The director Lina Wertmüller, the opera singer Maria Callas, the entrepreneur Wanda Ferragamo and the actress Franca Valeri are the four voices that will join the chorus of this TV series, broadcast today, Monday 2 January, at 11.20 pm on Rai 3 with the first of the four episodes.
It is a four-part docu-series, with as many actresses-narrators, who will be Michela Andreozzi, Silvia D’Amico, Anna Valle and Emanuela Fanelli. Each episode will offer a mix of cinematic storytelling, archival documents and first-hand accounts. Each episode is an interesting journey through the biographies of the four stars involved.

The four episodes of the docu-series

In the first episode (aired tonight) Michela Andreozzi will play a director who explores the life and career of Lina Wertmüller, the most famous Italian filmmaker in the world. We are talking about an artist who deserves credit for having succeeded in revolutionizing Italian cinema by speaking of social, political and sexual themes with a tone of voice grotesque and comical.

In the second episode, however, Silvia D’Amico prepares to stage a theatrical monologue inspired by Maria Callas, retracing the life of the great artist. Of her we will analyze the conflicting relationship between the two souls: the woman and the diva.

Then there’s Anna Valle, who plays the exemplary figure of Wanda Ferragamo in the docu-film that tells of her incredible entrepreneurial talent.

Finally Emanuela Fanelli, passionate about comic theater, will tell in the fourth episode of Illuminate the life of Franca Valeri. With the narrative trick of staging one of her sketches, Fanelli will retrace the career of the artist who revolutionized the world of entertainment, breaking the taboos relating to female comedy in a revolutionary and epochal way.

The fifth season of Illuminate it includes the precious testimonies of many illustrious voices.
In addition to many friends and family of those directly involved, colleagues from the world of art, culture and entertainment will offer their contribution.

For the episode dedicated to Lina Wertmüller, Claudia Gerini, Anna Melato, her daughter Maria Zulima, the actor and granddaughter Massimo Wertmüller, the journalist Laura Delli Colli, the director and collaborator Valerio Ruiz, the sociologist and friend Domenico De Masi participated. the set designer and assistant to her husband Virginia Vianello.

In the part relating to Maria Callas, there will be the biographer and collector of objects that belonged to the singer Michele Nocera, the soprano Selene Zanetti, the Head of the Zeffirelli Foundation archive Caterina D’Amico, the Orchestra Conductor Massimiliano Stefanelli, Enrico Stinchelli and Michele Suozzo, authors and radio announcers.

For Wanda Ferragamo, Carlo Conti, his daughter Giovanna Ferragamo, his grandchildren Ginevra Visconti and Diego di San Giuliano, the director of the museum and of the Ferragamo Foundation Stefania Ricci, the journalist and fashion critic Mariella Milani and the historic butler Silvano take the field.

Finally, for the focus on Franca Valeri there will be her daughter Stefania Bonfadelli, the actresses Cinzia Leone and Gabriella Franchini, the director of the Teatro Parenti in Milan Andree Ruth Shammah, the director and television presenter Pino Strabioli, the director and artistic director Giorgio Ferrara and the friend Michele Della Valle.

A TV series that also has an “on the road” soul

The fifth act of Illuminate it is also done “on the road”, with many visits to the places that were the background to the events of the four protagonists.

Among the many stops, we find Palazzo Spini Feroni in Florence, headquarters of Wanda Ferragamo’s company, as well as her estate in Fiesole, in the Florentine countryside. There is also Lake Bracciano, where Franca Valeri lived, and the Centro Sperimentale di Cinematografia, which was a fulcrum in the story of Lina Wertmüller. Verona, Sirmione and the Teatro Olimpico in Vicenza could not be missing, fundamental scenarios for retracing the history of the great Maria Callas.

Illuminate is an Anele production in collaboration with Rai Cultura.

The docu-series includes four episodes which are all produced by Gloria Giorgianni.

Directing the various four parts of the show we find Marco Spagnoli (for the episode on Lina Wertmüller), Matteo Raffaelli (for the episode dedicated to Maria Callas), Margherita Ferri (for the focus on Wanda Ferragamo) and Maria Iovine (for the relating to Franca Valeri).