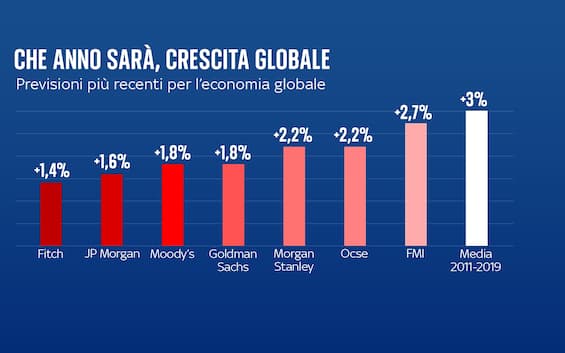 Energy, inflation and interest rate hikes will continue to hit the global economy, which is expected to achieve one of the lowest growth rates in twenty years. WATCH THE VIDEO

“The worst is yet to come”, this is how the International Monetary Fund had described the year that has just begun in its latest forecasts of last October. A judgment that the director Kristalina Georgieva recently returned to: “For most of the world economy, this will be a tough year, tougher than the one we leave behind”.

The International Monetary Fund predicts that more than a third of the global economy will fall into recession over the next few months, for a year that should be the worst for GDP since 2001 (excluding the crises of 2008 and 2020).

Estimates of global economic growth over the next 12 months vary widely. It starts from the +1.4% expected by the Fitch rating agency up to almost double expected by the International Monetary Fund.

In any case, even the most optimistic forecasts will be lower than the historical average of the last decade (excluding 2020).

Country you go, recession you find

Not all over the world, however, the crisis will strike with the same virulence. The Eurozone appears destined for a technical recession (ie a drop in GDP in at least two consecutive quarters) and Italy and Germany are the two most vulnerable countries. The United States, on the other hand, could still avoid a crisis. In any case, the majority of investment banks (including JP Morgan Chase, Morgan Stanley and Goldman Sachs) and international organizations believe that any American recession would be “light” if not “mild”.

Italy will be among the countries most vulnerable to the winds of crisis. After two years – 2021 and 2022 – in which the Italian economy managed to recover pre-Covid levels ahead of schedule and ahead of other major European countries, 2023 looks set to get us back on a zero growth path comma.

The graph shows the “slide” of the Italian growth estimates for 2023, published by the IMF, OECD, the Bank of Italy and the Italian government (more optimistic than the other institutes). At the end of 2021, the expected growth even exceeded 2.5%, to then drop suddenly when the war broke out in Ukraine. A sign of optimism is the upward revision of the Bank of Italy in its latest December report, which slightly changed the forecast from +0.3 to +0.4%. Not much, just one decimal point, but it’s the first positive revision in the last twelve months.

The rise in prices reached double figures in Italy, reaching +11.8% in November. In 2023 it should slow down slightly, stopping at an annual average of 7.3% according to the Bank of Italy (compared to the 2022 average of 8.8).

If the projections are confirmed, the loss of purchasing power of Italian employees would be accentuated. Compared to 2015, according to Sky TG24 elaborations on Istat and Bankitalia data, prices will increase by 22.5%, ten points more than wages.