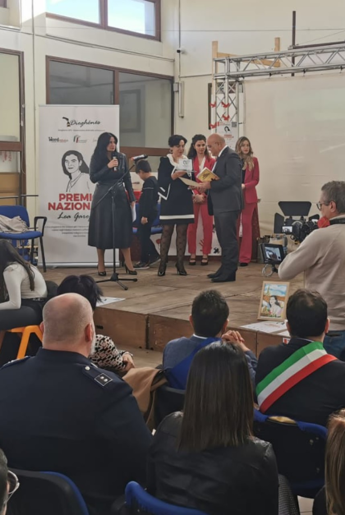 The award ceremony of the Lea Garofalo National Award was held today in Petilia Policastro, in the province of Crotone, the award dedicated to the courageous Calabrian woman who dissociated herself from the ‘Ndrangheta, also denouncing her own family members. To receive the award, from the hands of Lea’s sister, Marisa Garofalo, Giuseppe Antoci Honorary President of the Caponnetto Foundation and former President of the Nebrodi Park, who escaped a mafia ambush in May 2016 thanks to the armed intervention of the escort men of the Police of State that after a violent firefight they managed to put the bombers to flight, saving the life of the President. This is the motivation: “For his constant and concrete commitment to opposing criminal arrogance. As President of the Nebrodi Park, he demonstrated with deeds and not just with words that it is possible to fight against the mafias economically. The attack suffered and perpetrated by criminal cowards did not stop the law enforcement action and must not make us retreat a millimeter to arrive at the day of liberation”.


“This recognition is a great honor for me but also a great responsibility – declared Giuseppe Antoci in collecting the award. Lea’s story forces us to reflect deeply and confronts us with the value of the choice, the one carried out by a courageous woman who said no to the ‘Ndrangheta and to those who, even in the family, wanted to impose it on her” – continues Antoci. Lea’s story is a great story of courage. From 2002 to 2009 he put in place a whole series of collaborations with the judiciary, bringing significant aid to the investigations against the ‘Ndrangheta, but on November 24, 2009, Carlo Cosco, Lea’s ex-partner (who had now escaped from the special protection program for months ) attracts Lea to Milan, also with the excuse of talking about the future of their daughter Denise.

That, taking advantage of a moment in which Lea is left alone without Denise, Cosco takes her to an apartment that he had borrowed just for that purpose. Waiting for them at home is Vito Cosco known as “Sergio”. In that place Lea is killed. Carmine Venturino, Rosario Curcio and Massimo Sabatino will then take away the body from that apartment. In fact, Lea’s body is taken to San Fruttuoso, a district of Monza, where it is then set on fire for three days until it is completely destroyed (only after the first degree conviction, Carmine Venturino begins to make statements that in the Appeal process will lead to the discovery of more than 2,000 bone fragments and the woman’s necklace). “Today in receiving the award, my thoughts went to Lea, to that choice, to that fear, to that cruel death. It is precisely that choice that we must take upon ourselves, choose between them and us, between life and death, between dignity and prevarication. Lea has chosen, but to honor her sacrifice, each of us must do it too. Without fear and perhaps without even courage. With normality. By doing this we will give both a caress to that broken heart of Lea and to the one still alive and throbbing in each of us”, concludes Antoc