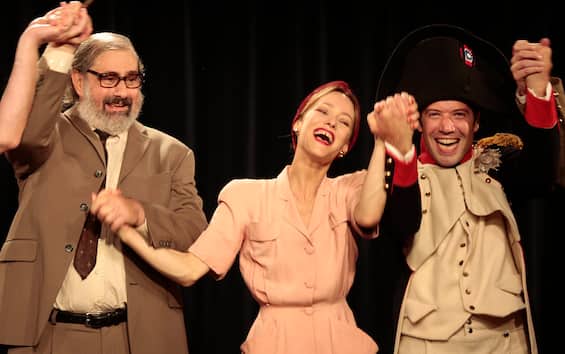 The trailer of the film is out In Bed with Sartredirected by Samuel Benchetrit and starring François Damiens, Vanessa Paradis and Valeria Bruni Tedeschi.

The film will arrive in cinemas from 26 January with I Wonder Pictures and Unipol Biografilm Collection. It is an ironic and very tender comedy that was appreciated by both the public and the critics at the last edition of the Cannes Film Festival.

It tells of a group of bizarre characters that we will see grappling with the therapeutic power of art, between poetry and theatre. Without neglecting another fundamental ingredient for the therapeutic and cathartic recipe: love.
Their stories will intertwine, forming a very tender, light but at the same time intelligent and original choral comedy.

“Let’s just say it’s an absurd and poetic comedy”, declared the director, who has always been inclined to tell stories in which various existential threads intertwine in a tangled and unexpected skein.
There are “tough boys who become tender, seized by a tenderness that surpasses them”, added Benchetrit.

In bed with Sartre relies on a necessity that is of vital importance for man, just like food, water, light and oxygen: it is the need for art, poetry and beauty, the only remedies against loneliness and the brutishness of the soul.

You can watch the official trailer of the film In bed with Sartre in the video that you find above, at the head of this article.

In bed with Sartre tells of Jeff, a small local boss who falls in love with a cashier and will try to seduce her by sending her poignant love poems. Then there are Jésus and Poussin, her henchmen, who between one philosophical reflection and another will help the daughter of the boss, a teenager, to get closer to the boy she is crushed on.
And there is Jacky, a penniless henchman without any talent who will fall madly in love with an aspiring theater actress. Jacky so lost in this girl that he will do anything to be next to her, even going so far as to act with her in a play that tells the sex life of Sartre and Simone de Beauvoir (hence the title of the film).

You can watch the official trailer of the film In bed with Sartre in the video that you find above, at the top of this article.