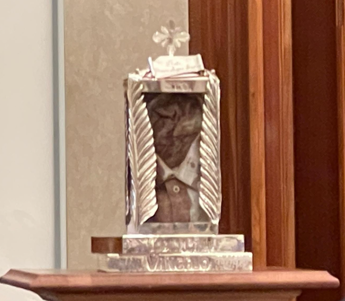 Exhibited (also) in the Palaces of power, the relic of Rosario Livatino, the boy judge killed by the mafia, by the ‘Stidda agrigentina’, on 21 September 1990, arrived in the Senate, at the library of Santa Maria sopra Minerva. case, the bloody shirt of the judge who died at the age of 37, who became blessed in May 1921, materialized in the eyes of the parliamentarians, in the hours of the capture of the boss Messina Denaro, reminding them of one of the magistrates who paid for the fight with his life to organized crime in Sicily. In Montecitorio, seat of the Chamber, the first passage yesterday, where a photographic exhibition has already been set up for days, with blow-ups of Pio La Torre, Paolo Borsellino and Giovanni Falcone.

Today in the Sala Capitolare politicians and magistrates discuss the ‘Currency of Blessed Rosario Livatino’. With the parliamentarians and the presidents of the Senate and Chamber, Ignazio La Russa and Lorenzo Fontana, Cardinal Pietro Parolin, secretary of state at the Vatican. Also in the Hall were the prosecutor of Rome, Francesco Lo Voi, the undersecretary to the Presidency of the Council, Alfredo Mantovano, one of the founders of the ‘Livatino study centre’.

Today in the Senate is one of the stops that host the memory of Livatino, one of the appointments scheduled for the week of the Capitoline pilgrimage of the ‘bloody shirt’. Already taken to churches and basilicas in the capital, the case will also be exhibited at the General Command of the Guardia di Finanza, in the headquarters of Confindustria, at the headquarters of the Superior Council of Magistrates and the Ministry of Justice.