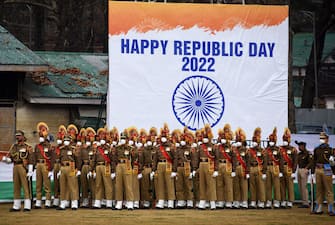 India is celebrating Republic Day today, the 73rd anniversary of the entry into force of the Constitution and its formal transformation into an autonomous Republic

Demonstrations and parades were held in all the cities of the country: the most spectacular event of the year was that of the ITBP, the police force on the Indo-Tibetan border, known as the “Sentinel of the Himalayas”: in Auli, in Himalayan state of Uttarakhand a group of soldiers performed a march on skis, at 3,353 meters above sea level and minus 20 below zero

The New Delhi parade, watched on television and online by millions of Indians, began an hour later than expected due to the fog and poor visibility created by an exceptional cold wave

Twelve floats inspired by the cultural traditions of as many states also paraded. Shivangi Singh, the first Indian pilot of a fighter jet, on the chariot of the Indian Air Force tableau

The air force also paraded, with 75 jets flying over the center of the capital, the largest ever patrol

The 73rd anniversary celebrations of the Indian Constitution will conclude on January 29 in New Delhi, with a laser and drone show at the end of the Beating Retreat ceremony.

The government removed the hymn ‘Abide with Me’, much loved by Mahatma Gandhi, from the program, stating that it only wants Indian anthems

The pandemic not only reduced the duration of the parade, the number of participants, but canceled the invitation to the foreign guest of honor from 2020

Among the foreign guests, the first was the Indonesian president Sukarno, in 1950, followed, among others, by Marshal Ye Jianying, a veteran of the Chinese Communist Party in 1958, and a Pakistani delegate in 1965.

In 2015, US President Obama was invited by Prime Minister Modi on his first Republic Day