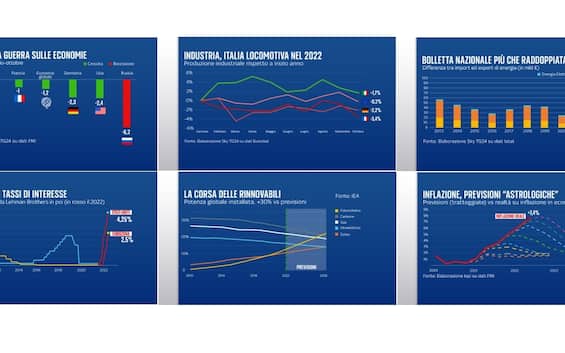 The global economy continued to grow in 2022, but inflation and the energy crisis reduced initial ambitions. Energy costs have skyrocketed, and prices have hit 1980s records. But there is positive news on renewables and Italian growth. WATCH THE VIDEO

2022 was a year that will be remembered in economics and history textbooks. First of all for the Russian invasion of Ukraine, which has upset an economic system that still had to stabilize itself from the pandemic.

The global economy slows down, Russia goes into recession

In its latest economic forecasts prior to the conflict, the International Monetary Fund estimated global growth of 4.4 percent, with the US leading the way at +4 closely followed by the Eurozone at +3.9. The conflict has upset the scenario, and in April the IMF itself revised its forecasts downwards, by almost one point for the global economy and the Euro area, and more than ten for Russia, in recession due to international sanctions . In its latest October outlook, the IMF recorded a sharp slowdown for the US economy compared to expectations at the beginning of the year, as well as for the German one.

However, a completely different story for the Russian Federation, which is expected to suffer a drop in GDP of more than 3 points in 2022, and probably as many in the next twelve months. After an initial period in which it benefited from high energy prices, between the replacement of gas contracts by the European Union and the price cap on oil, the Russian government itself admitted the first negative effects on the economy, with a deficit/GDP ratio higher than forecasts in 2023.

“The Worst Energy Crisis Ever”

This is how the International Energy Agency defined it, even more serious than the oil ones registered in the 70s. Italy is among the countries that has suffered the worst consequences, given the high dependence on foreign countries for supplies of hydrocarbons.

The “national bill” – calculated as the difference between energy imports and exports – of our country has now exceeded 100 billion euros, more than doubling compared to 2021 although Istat has not yet published the data relating to the last two months of the year.

Due to how the national GDP is calculated, this outlay has caused the loss of several points of potential growth as well as bringing the Italian trade balance into a deficit, characterized instead in recent years by the prevalence of exports.

Inflation at its highest since the 1980s

The economic surprise of 2022 was inflation which, already on the rise in the second half of 2021, has reached levels that almost no one had predicted. The central banks themselves – the Fed and the ECB in the lead – had bet on a “temporary” rise in prices, due to the difficulty of production and logistics in responding to the acceleration of orders and purchases due to the post-Covid reopening. In fact, inflation has reached its highest level since the 1980s, exceeding forecasts one by one.

The reaction of central banks

Central bankers were therefore forced to run for cover, raising interest rates. In doing so, they have increased the cost of loans for businesses and households and induced a slowdown in the economic cycle, and therefore – hopefully – also in prices. During the year, in Italy as in the USA, interest rates on mortgages tripled.

2022 will be a year that will be remembered, with the Fed led by Jerome Powell carrying out the fastest rate hike ever and the ECB bringing the cost of money back to levels not seen since the end of 2008. by chance the financial markets, after two years on the wings of enthusiasm, have marked their worst performances since the Lehman Brothers crisis. However, it doesn’t seem over yet: Christine Lagarde warned that “further increases” will follow until inflation is back under control.

There is also (a little) good news

The energy crisis has led investments in renewable sources to accelerate without precedent according to the International Energy Agency. Forecasts of new installed capacity have improved by about 30 percent in just one year.

Electricity generated by solar and wind will double in the next five years, and the installed capacity of solar panels is expected to surpass that of coal-fired plants by 2027. The era of fossil fuels looks increasingly doomed.

The Italian economy has continued to grow, despite the record rise in prices and the war in Ukraine. After an initial moment in which it seemed that our country would suffer a recession in the second half of the year, over the months the Italian manufacturing system withstood the blow, continuing to grow at a good pace. So much so that it recorded the best industrial production among the major European economies since the beginning of the year.

A surprising result, taking into account that in 2021 the Italian economy had already grown more than the European average and that the industrial sector in the last months of the year saved up to a quarter of gas compared to usual, to cope with the high prices.

Positive news for 2023, which according to analysts is preparing to plunge the Eurozone and Italy back into recession for the third time since the beginning of the Millennium.