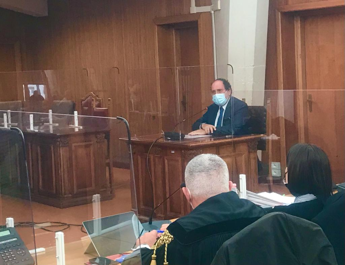 (from the correspondent Elvira Terranova) – A few days before being killed in the Via D’Amelio massacre, judge Paolo Borsellino had become cautious, “he did not trust many prosecutors of the Prosecutor” and “always kept the door closed”, unlike of the previous months when “he smiled and in his room there was a large number of colleagues”. His former protégé, Antonio Ingroia, tells the story of the last days of the anti-mafia judge. Heard as witnesses for the prosecution in the trial on the misdirection of the investigation of the Via D’Amelio massacre, the former Deputy Prosecutor of Palermo and now a lawyer, answering the questions of the prosecutor Maurizio Bonaccorso, tells the period before and immediately following the massacre. At the stand there are three policemen, Mario Bo, Michele Ribaudo and Fabrizio Mattei, accused of having induced the former repentant Vincenzo Scarantino to lie by accusing innocent people.

Responding during the cross-examination to the questions of the lawyer of the Borsellino family, the lawyer Fabio Trizzino, who is also the son-in-law of the judge killed in the massacre, explained that the judge trusted him and “a few others”. “He thought that 80 percent of the power of attorney was controlled by the then Attorney Giammanco …”, explains Ingroia. He also says that in the months following the Capaci massacre he told him “that it was his intention to work alongside him during the summer for the collaboration of some collaborators, in particular Leonardo Messina. Because he trusted me, and because there were many magistrates whom he did not trust. I that day, July 15, 1992, the last time I saw him, I said I was going to take a few days off but he didn’t take it well. I went to say hello but he stayed with his head bowed, he greeted me coldly “. Borsellino had asked Ingroia to assist him, in particular, in the management of two collaborators, Gaspare Mutolo and Leonardo Messina. “He told me ‘Let all these go on vacation and we’ll work on it.’ Because he was going to a prosecutor’s office that he considered 80 percent controlled by Attorney Giammanco. Then there was a small group scornfully called the ‘Falconians.’ which for him was a point of reference “. And he further explains that before the via D’Amelio massacre, judge Paolo Borsellino had changed his attitude.

“Before he was always cheerful and outgoing, unlike Giovanni Falcone who was more reserved”, Ingroia continues. “I remember one day he told me in his room not to tell anyone about an important collaboration that was about to arrive – he says – first time he did not even tell me his name, but that there was a large repentant who was preparing to collaborate and who in his opinion could shed light on the links between the Cosa Nostra and other environments. He asked me not to tell Roberto Scarpinato either, because the latter was someone I spoke to. “The reference is to Gaspare Mutolo. Another chapter dealt with by Ingroia is that of the former secret service executive, Bruno Contrada. Arrested at Christmas Eve 1992 for external competition in mafia association, after the declarations of the repentant Mutolo. “On 1 July 1992 Bruno Contrada, then at the Secret Service, knew of the collaboration of Gaspare Mutolo”, “which was still top secret”, Ingroia says. And he says he learned about it a few hours after the massacre. “Paolo Borsellino on 1 July went that day to the Viminale where he met Contrada who made him understand that he knew of Mutolo’s collaboration. For Paolo it was a worrying sign. Because inside the Interior Ministry someone sent him to say that Contrada was not alone. “” Paolo perceived this as a worrying signal. He thought that someone from the Ministry of the Interior wanted to let him know that Contrada was not alone and they were behind I learned this from Carmelo Canale and then from Agnese Borsellino “.

Then, he tells of episodes “also disconcerting” that involved the former Prosecutor of Caltanissetta Giovanni Tinebra, “also towards me”. “He also had an intimidating attitude towards me on one occasion”. He says. “Over the years I became convinced that on the part of Tinebra there was on the one hand a position of conflict and opposition to the initiatives that the Palermo Public Prosecutor took – Ingroia says – and this led me to make public statements in which I criticized the Prosecutor’s Office for not investigating the so-called external principals of the massacre. This statement, which was published by various press organs close to the anniversary of the attack, provoked a reaction from Tinebra who approached me in a meeting at DNA and told me with an intimidating attitude: ‘I’ll let you pass this, but don’t allow yourself more than criticizing what I’m doing ‘”.

In the days following the massacre in via D’Amelio, the then Chief Prosecutor of Caltanissetta Giovanni Tinebra asked the then young prosecutor Antonio Ingroia to meet him, given his proximity to the judge Paolo Borsellino. And on that occasion Ingroia told him what he had learned on the day of the attack from two colleagues, Teresa Principato and Ignazio De Francisci. “After the massacre in via D’Amelio, on Sunday itself, many of us prosecutors closest to Paolo moved to the prosecutor’s offices. We were sitting on the bench in the corridors, I with my colleagues Teresa Principato and Ignazio de Francisci. And they me they told a detail that they had learned from Borsellino the day before. ”“ That day Paolo made a singular passage through the rooms of some public prosecutors as if he were taking leave of everyone and on that occasion he had told him that he had learned ”. At that juncture, his colleagues told him that they had learned from Borsellino that his collaborator Gaspare Mutolo had told him, off the record, about some revelations he would have made about men of the State, in particular about a magistrate, Domenico Signorino (who later committed suicide ed) and a member of the secret services, Bruno Contrada. “This is what I reported to Doctor Tinebra. I don’t remember if at the same juncture my colleagues also told me about the episode of the meeting between Borsellino and Contrada. Mutolo said to him: ‘Doctor, watch your back because there are complicities with the Cosa Nostra within the State’ and gave him the names of Signorino and Contrada “.

And then he remembers that the day he met Tinebra he told him that the Prosecutor was investigating the Contrada. That same day Tinebra called Contrada to ask him to help him in the investigation into the Via D’Amelio massacre, as recounted by the Contrada himself recently, heard by the regional anti-mafia commission at Ars.

Ingroia then spoke of Vincenzo Scarantino, the former false repentant, who also accused former Prime Minister Silvio Berlusconi. ”I questioned Vincenzo Scarantino as a substitute. We were told that he had alleged revelations to be made against Bruno Contrada, relating to alleged tips from the latter that would have made police operations fade, and revelations about Silvio Berlusconi’s involvement in drug trafficking “, he says. Those about Berlusconi to my nose they immediately seemed unreliable and in fact there were no comparisons. In reference to those on the Contrada there were generic findings but there was no element on the fact that Contrada could “.

Also today the former defender of the false repentant Vincenzo Scarantino was heard. Santino Forest. He remembers, in particular, when on 2 September 1998, while the interrogation of the then collaborator of justice Vincenzo Scarantino was underway, “at a certain point the repentant retracted all the statements made previously” on the via D’Amelio massacre , “saying he was forced to make those statements.” “His words puzzled everyone a little. Especially the magistrates – he says – I remember that prosecutor Giordano put his hands in his hair ”. But after a while, during the same interrogation he retracted his own retraction and confirmed what he had previously said to the magistrates ”. After being imprisoned in the maximum security prison of Pianosa, Scarantino decided to collaborate with the investigators by explaining how the massacre in which Judge Borsellino died was organized for which he was sentenced to 18 years and then accused the policemen and magistrates, who would have pushed him to make those accusations. In 1998 Scarantino admitted that he had not taken part in the attack in via D’Amelio and that he was forced by the then head of the Palermo mobile squad to confess the false and that he had suffered mistreatment during his detention in the Pianosa prison. In 2007 it was the repentant Gaspare Spatuzza who told that he was the author of the theft of the Fiat 126 car used for the attack, exonerating Scarantino and proving that he was a fake repentant, used to divert the investigation into Borsellino’s death.

The lawyer Foresta, who in the past has also assisted other collaborators such as Gioacchino La Barbera and Santino Di Matteo, tells in the courtroom that that day, in 1998, at the interrogation, there were prosecutors Francesco Paolo Giordano, Annamaria Palma and Carmelo Petralia . ” ‘What happened in the interrogation?’ ‘Asks the lawyer Giuseppe Scozzola, who represents the civil party in the trial. ” Scarantino left a little freewheeling and suddenly began to retract all the statements made previously – says Foresta – these words of his puzzled everyone, but above all the magistrates who knew the investigative documents. He said he was under pressure but he didn’t say by whom. ” By the prosecutors? Asks the lawyer Scozzola. “I don’t think so, the prosecutors were baffled”. By the police? the lawyer asks. ” I don’t know but certainly not by the magistrates ”. After a while during the same interrogation he retracted the retraction. – says the lawyer Foresta – So the interrogation ended with the confirmation of the first interrogation “.

When asked by the lawyer Giuseppe Seminara if after the retraction of Scarantino “there is an interlocution or a confrontation with the magistrates”, he replies: “There was a pause in which what he had said was recorded, then he retracted the retraction giving a explanation. But there was no conversation between Scarantino and prosecutors. I stayed with the magistrates and Scarantino was four months away. I don’t think anyone approached him, I would have seen him. The context was particular “.

A former lawyer of the false repentant Francesco Andriotta was also heard during the hearing. Which excludes “ever having delivered documents, notes or deeds of Dr. Annamaria Palma to Francesco Andriotta ”. To speak is the lawyer Floriana Maris. The trial was postponed to next December 22nd.