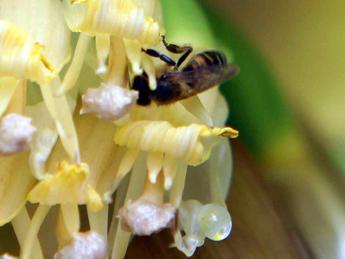 An innovative biopesticide ally of bees. Enea, in collaboration with the Experimental Zooprophylactic Institute of the South, has developed a biopesticide that protects beesexploiting molecules that exert a natural control on pests.


“Over the past 10-15 years, European beekeepers have reported an unusual decrease in the number of bees and colony losses, particularly in Western European countries, including Italy. A phenomenon that has various causes, such as intensive agriculture, the use of pesticides, habitat loss, viruses but also attacks by pathogens and invasive species such as the Varroa destructor mite, which has been present throughout Italy for years ” , explains Salvatore Arpaia, researcher of the Enea Division of Bioenergy, Biorefinery and Green Chemistry. “The Asian hornet Vespa velutina and the small hive beetle Aethina tumida have recently been added to the latter species – continues the researcher – which, at the moment, has a territorial diffusion limited to the southernmost part of Calabria. And we tested our innovative biopesticide in this region, at the section of the Zooprophylactic Institute of Reggio Calabria, where the beetle is kept on the farm subjected to stringent containment measures “.

At the base of the new ‘pesticide’ there are biotechnologies, or rather the interfering RNA techniquewhich exploits a natural mechanism present in plant and animal organisms to lead to the loss of functionality of a target gene, essential for the survival or fertility of the insect.

“The results obtained clearly indicate that the administration by ingestion of our biopesticide, which uses the action of specific double-stranded Rna molecules against two Aethina tumida genes, induces anti-metabolic effects on the development and reproduction of the beetle. In fact, the larvae fed with a diet containing the molecules that we synthesized in our Enea laboratories in Trisaia, in Basilicata, suffer from a decrease in the rate of development, a slowdown in the biological cycle and, as adults, a significant reduction in fertility. The coexistence of these three effects in a population in nature leads to a predictable rapid containment of the beetle damage to the hiveof beekeeping production, without any risk for the environment and for man ”, underlines Arpaia.

“As regards the protection of the health of bees subjected to treatment with a dsRna-based insecticide, a first evaluation was made with a similarity analysis of the sequences between the two dsRna used and the genome of Apis mellifera, which is completely sequenced. The very low similarity revealed by the Blast analysis leads to the exclusion of any effects due to the sequence used. To evaluate the possibility of off-target effects on bees, it will be necessary to proceed to a subsequent in vivo test, even if the evidence available in the literature referring to other dsRna indicates that the bee is generally not very sensitive to the gene silencing induced by the molecules we have used ”, concludes the researcher Enea.

The small hive beetle is an insect of the Nitidulidae family and of the order of Coleoptera, infesting the colonies of Apis mellifera. It is a species native to South Africa and endemic to the tropical and subtropical regions of Sub-Saharan Africa; was found for the first time in Europe, in Calabria, in September 2014. The insect is included in the list of the Sanitary Code for terrestrial animals of the Woah (World Organization for Animal Health) as an emerging pathology of bees and is subject to international notification. Furthermore, it is included in Annex II of the EU Reg. 429/2016 which establishes the obligation of notification and measures for eradication.