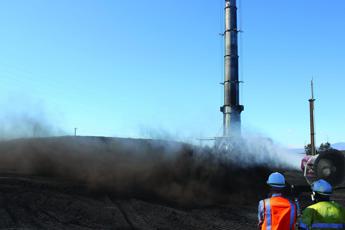 Here comes the first mist cannon to shoot down polluting dust. Made in Italy technology and announcing the arrival of the cannon againstpollution it was the Idrobase Group from Padua which also just put on the market a device to eliminate viruses such as Sars-Cov-2 which causes Covid. The first ‘fog’ cannon at 120 bar it is capable of ejecting billions of micro-droplets slightly larger than the polluting particles of PM 2.5, thus guaranteeing their complete reduction. Exposure to fine particles is an established cause of lung, colon and intestinal cancer and industrial areas and cities are those at greatest risk – over 400,000 deaths per year are estimated in Europe alone – especially in countries with rapid economic growth, the experts of the Paduan society recall. “For Idrobase Group, 2023 will be another year of challenges on global markets” commented the Co-President of the Borgoricco group, Bruno Ferrarese.

Ferrarese indicates a 20% growth potential in turnover, which also closed positively in 2022, despite the fire, which destroyed one of the warehouses in July, whose new warehouse will be significantly inaugurated a year later together with renovated corporate offices. The Idrobase Group has also placed on the market the Bkm intended to eliminate viruses, including the Covid, and of which he presented the 3.0 version, the result of research with the University of Padua and intended to maintain healthy environments large up to 200 square meters. The air purifier for indoor environments uses UV-C technology to directly break down airborne pathogens and which also activates a photo-catalyst, based on titania nano-particles, which reduces the concentration of volatile organic compounds (Voc) in the air. air.

The development of the device lasted 10 months and was based on the experiments performed on n-decane, toluene, formaldehyde, trichlorethylene, acetone, as regards Voc; on escherichia coli, with regard to pathogens. The multinational underlines that in this regard, the resistance scale indicated by the Food and Drugs Administration (Fda) was considered, which identifies the category of bacteria among the most resistant to disinfection operations among microorganisms, even compared to lipid barrier viruses like coronaviruses. In this context, the co-president of Ferrarese underlines once again that 2023 “will be a year aimed at increasing the internationalization of our business, for this reason, at the end of the month, we will be engaged in a trade mission, which will touch the United States and Japan, while in Korea and Vietnam will sign new agreements to improve our presence on the Far East markets”.