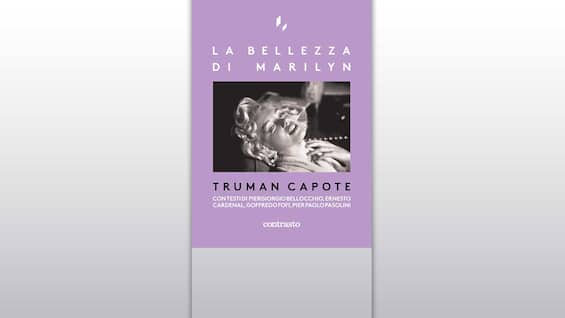 On the night between August 4 and 5, 1962, Marilyn Monroe was found lifeless in her Los Angeles mansion. On the official causes of her death – barbiturate overdose – more than someone over the years has harbored some doubts, it has never been so for her indisputable charm. To remember it ContrastoBooks publishes The beauty of Marilynwhich contains a text by Truman Capote and interventions by Piergiorgio Bellocchio, Ernesto Cardenal, Goffredo Fofi, Pier Paolo Pasolini.

Thus, the curator of the volume, Alessandra Mauro, says about the criterion for choosing the contributions that are in the book: “We have chosen contributions that we have considered important and not taken for granted. Thus, for example, the texts of intellectuals who are certainly not entertainment journalists or who follow the news of the cinema, illuminate a complex and multifaceted Marilyn Monroe and help to reflect on The role of her image. The text by Truman Capote, then, is of incredible strength: Capote knew Marilyn well and was inspired by her to write the story Breakfast at Tiffany’s from which the film was then made which had an extraordinary interpreter, but completely different from Marilyn “.

What Marilyn will we know by reading the book and looking at the beautiful photographs it contains?
These texts allow us to get in touch with a different Marilyn from the glossy image we see in the movies. Thus, we meet and get close to a girl with great charm and at the same time of great fragility, more or less evident. A girl whose image has been used too massively by the cinema machine and by the culture of consumption and these texts, and these photos, make us understand the complexity of the Marilyn phenomenon based precisely on the disconnect between person and image.

She’ll have an idea, I guess, as to why the Monroe myth still holds out, 60 years after the actress’s death. Is it just for “The Beauty of Marilyn”?
The myth of Marilyn still resists because death crystallized in a unique and emblematic way the difficulty – if not the impossibility – of being, in consumer society, both image and person. With her extraordinary beauty, a mixture of an irrepressible physicality, but also of a captivating charm and an intelligence that shines through in interviews and photographs, Marilyn thus represents the symbol of the eternal beautiful girl who, however, cannot live her personality at the same time. complex and confused, with the diva that the Hollywood system had created for her. After all, the conflict between image and person is one of the keys of our contemporary society.