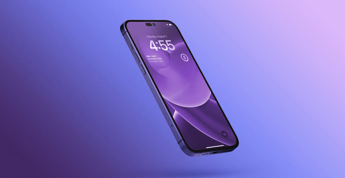 In a Twitter post by a well-known leader, new details have emerged on the iPhone 14 and 14 Pro, in this case on the colors available at launch, which should take place next October. In particular, the iPhone 14 line, in which there will be a 6.1-inch and a 6.7-inch model, will be presented in green, purple, blue, black, white and red. Purple will be the color of the year for the iPhone, according to these rumors, because it will also be present in the Pro line along with green, silver, gold and graphite. The leak also talks about the appearance of the iPhone home screen with the always on display active, or the debut of the screen always on even when the phone is in standby. It seems that iPhone will show the time and the widgets that you have chosen to fix in the lock screen, with a transition effect from white to color. Finally, again among the rumors revealed by the Twitter leader, it seems that Apple has definitively put aside the idea of ​​making part of the iPhone 14 Pro in titanium, remaining on the same steel as the 13 Pro. One thing will change, however: the charging speed. The next smartphone of the Apple, in fact, will support the speed at 30W compared to the 20 of the current generation. It looks like the MagSafe Charging Magnets will be slightly wider and stronger.


Colors are as follows this year: