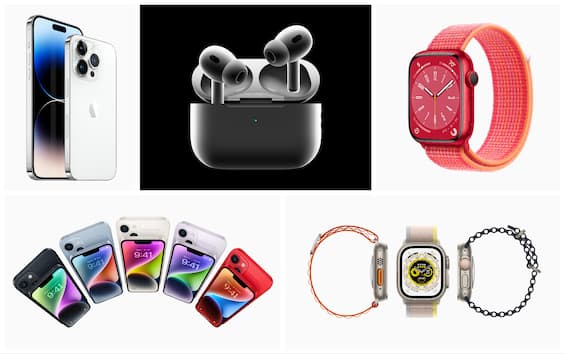 Lots of news and an updated line of iPhone and Apple Watch and the model model of AirPods Pro. These are the news from Apple presented in the annual event in early September. Let’s go see all the details.

Let’s start with the two basic models, the 14 and the 14 Plus, which stand out for having a display of 6.1 and 6.7 inches respectively. These are models that bring the features of iPHone 13 Pro and Pro Max to a lower price range, such as the Apple A15 chip. Five colors – Midnight, Starlight, a new Blue, Purple and Product (RED) – feature a Super Retina XDR display with up to 1,200 Nit bright OLED screen and Dolby Vision system. Display that is also more resistant thanks to the Ceramic Shield and an aerospace aluminum body. iPhone 14 and 14 Plus house a new camera system on board whose main feature is to improve the quality of photos in all light conditions, even the lowest. The new main camera has a 12 megapixel sensor with a faster opening than previous models; Also present is the ultra-wide-angle camera while on the screen we find a TrueDepth front camera, also able to improve photos thanks to a hybrid system that focuses better on subjects in low light conditions. Another novelty has been introduced across the board: it is called Photonic Engine and also in this case improves videos and photos taken with low light intensity while for video lovers there is Action Mode, a new stabilization system that – assured by Apple – will make us forget about gimbals and other accessories. Among other novelties, given the spread of eSim (the electronic sims that will replace physical sim cards), in the models sold in the United States there will no longer be the drawer to insert the ticket, everything will be virtual and managed by the operating system; Crash Detection, on the other hand, is a new safety system that uses a new gyroscope and a new accelerometer making sure that the phone is able to understand if we have been involved in a traffic accident, automatically calling for help. And for those who love to go to remote areas where there is no cellular connection, another innovative function arrives, available for the moment only in the United States and Canada: iPhone will be able to connect to satellites thanks to ad hoc components and software that will allow, for example, to ask for help or report your position. Italian prices: starting from 1,029 euros for the iPhone 14, iPhone 14 Plus will start from 1,179 euros.

The main novelty of the iPhone 14 Pro (6.1-inch screen) and iPhone 14 Pro Max (6.7-inch screen) – which are the best performing iPhones with the most innovative features presented today – is a new idea to exploit at best the “notch”, the notch on the top of the screen on which the cameras are housed. Well, it becomes smaller and is enclosed within an interactive area called Dynamic Island (dynamic island): in this space, which adapts to our needs, information, alerts, notifications will appear in a new and innovative control center. of the phone. The other novelty long awaited by smartphone lovers with Apple is the Always-On Display, the always-on display: it provides essential information with a screen that remains always on (even if darker) thanks to the new A16 Bionic chip. on energy efficiency, displays and cameras, which offers – they explain from Apple – “incredible performance” using little energy. The new display of the Pro and Pro Max models is much brighter than the previous ones (1,600 Nit with a peak under the sunlight of 2,000 Nit.) Lots of news also on the photography side: the new 48 megapixel camera with Quad Pixel Sensor houses the largest sensor ever installed on an iPhone and also in this case promises to improve our shots and light management in real time. There is also a 12-megapixel Telephoto lens and a 12-megapixel ultra-wide-angle lens, both of which feature a machine learning process that automatically improves imperfections in photos. also marked and improved the flash, thanks to nine LED lights that control hue and intensity. Waiting to know the prices in Italy, the Pro model will cost 1,339 euros, the Pro Max (which can even reach the capacity of a terabyte of storage space) starts at 1,489 euros. Four colors: a new Space Black, Silver, Gold and Deep Purple.

The Apple Watch line is completely updated with three new models, the smartwatches – explains Apple’s CEO, Tim Cook – the best-selling and most popular in the world. Let’s start with the main model, the Apple Watch Series 8, which has a larger and brighter display and which – in addition to detecting irregular heart rhythm, blood oxygen level or falls, integrates the new incident detection function road (the same present on the new iPhones) that automatically connects with the emergency services providing contacts and position, thanks to a complex algorithm that analyzes data from the gyroscope, accelerometer, barometer, microphone and GPS. There is also a new temperature sensor that improves the tracking functions of the menstrual cycle by providing important information on ovulation and, in general, on female health (encrypted data on the phone, which can possibly be shared with your doctor only after giving authorization. via software). Among other novelties, an energy saving function that promises up to 36 hours of use on a single charge. Apple Watch Series 8 is constructed from recycled aluminum and sold in four colors: Midnight, Starlight, Silver, and Product (Red). Three finishes (Silver, Gold, Graphite) prices start at 509 euros.

After the success of the last version, the Apple Watch SE is also updated, the cheaper one, which integrates many of the functions present on the main model. Prices from 309 euros.

Apple then presented another smartwatch designed for those who love to explore, go on adventures in open and, perhaps, prohibitive spaces, made available after years of development. We are talking about Apple Watch Ultra, the most “pushed” Apple Watch, with new capabilities and greater resistance. It has an aerospace titanium case, a flat display that avoids accidental scratches and is easier to read even in strong sunlight. It has a new button located to the left of the case, in orange, which allows you to quickly access customizable functions. It also works with gloves, has three microphones and a battery that lasts up to 36 hours on a single charge. Among the other “goodies” of the Ultra version a night mode that makes the display become red (a bit like military equipment, easy to read in the dark). Apple Watch Ultra works from 55 to -20 degrees, has new compass software that allows you to easily return to a point (like a base camp, for example) by retracing your steps and an 86 decibel siren to call attention. In addition, it has a new app (Oceanic +) that is automatically activated underwater designed together with diving experts that offers all the information at a glance to swim and dive safely. 49 mm case, price 1.009 euros.

Finally, Apple has updated the AirPods Pro, the most popular and most famous headphones in the world, as Tim Cook explains. They integrate a new H2 chip from Apple, a new low distortion driver and a custom amplifier that offers more detail and greater clarity. Spatial Audio is taken to the next level with Custom Spatial Audio, which creates a personal audio profile based on the shape and shape of your head and ears. It also improves the active noise cancellation system while the Transparency mode (which is used to listen to external noises when we wear headphones) becomes more intelligent and reduces the loudest noises such as road works, analyzing 48 thousand times per second the external environment. Finally, it will be possible by touching the bar up or down to raise or lower the volume. The new AirPods Pro offer up to six hours of listening on a single charge and an additional thirty hours when charging the case. The price is 299 euros.