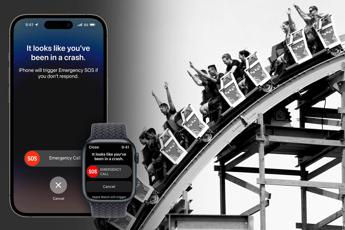 In recent weeks in the US, 911 has received several automatic calls from Siri, but it was not about car crashes

When the family of iPhone 14 and Apple Watch Series 8 and Ultra arrived on the market, a new feature debuted, namely the detection of incidents with a call to the security services if the user does not respond to the alert and does not claim to be okay. . The feature activates when we have a car accident, but in recent weeks in the US, 911 has received automatic distress calls from users wearing their Apple device on a roller coaster. An article in the Wall Street Journal reports several cases of iPhones exchanging a roller coaster ride for a car accident, setting off the alarm. Coaster 101 Amusement Park has begun posting notices to the public, including on the site, encouraging people not to bring digital devices with them on board the rides, as the sudden, dynamic movement could trigger the crash and fall detection sensors. While waiting for Apple to solve the problem with a software update, if possible, the advice is to face the roller coaster with an iPhone 14 or an Apple Watch 8 yes, but with the airplane mode activated, or turned off.