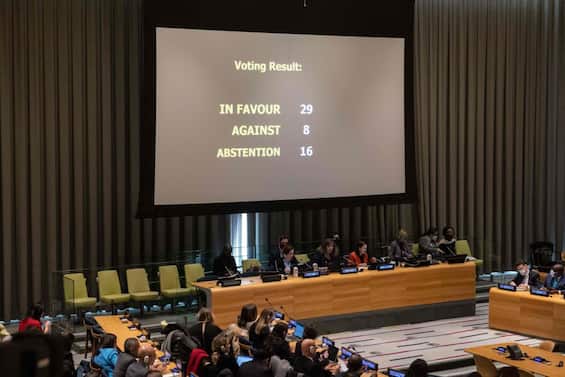 A draft resolution to “with immediate effect remove” Iran from the Commission on the Status of Women “for the remainder of its term 2022-2026” was adopted by the 54-member United Nations Economic and Social Council. There were 29 votes in favor, eight against including those of Russia and China, 16 abstentions (Bangladesh, Belize, Botswana, Congo, Ivory Coast, Esawatini, Gabon, India, Indonesia, Madagascar, Mauritius, Mexico, Islands Solomon, Thailand, Tunisia, Tanzania). The vote had been proposed by the United States in relation to the hard line adopted by the Iranian authorities towards the ongoing street demonstrations throughout the Islamic Republic triggered by the death of Masha Amini, who died at the age of 22 after being arrested by Tehran’s morality police with the accusation of not wearing the Islamic veil correctly.

Tehran has condemned and defined the resolution approved by the UN as “illegal”. The expulsion from the UN Commission is “a political heresy that discredits this international organization and also creates a unilateral procedure for future abuses of international institutions,” Islamic Republic Foreign Ministry spokesman Nasser Kanani said. , attacking the United States, which proposed the resolution. Criticizing the UN decision, Secretary of the High Council for Human Rights of Iran Kazem Gharibabadi accused Washington of having “given full support to the killing by terrorist groups of thousands of Iranian women” since it was founded the Islamic Republic.