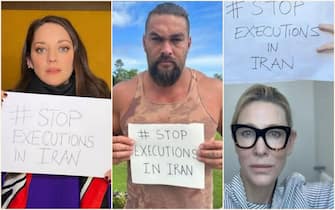 The actors of Hollywood express their opposition to the repression of protests in Iran. From the Oscar winner Cate Blanchett to Marion Cotillardmany have responded to the call launched by the artists Nicole Najafi, Ana Lily Amirpour and Mozhan Marnò. The cinema and TV stars appear in a video message spread on social networks and taken from Hollywood Reporters, where they silently hold up a sign with the hashtag #StopExecutionsinIran

Iran, Naples take to the streets to ask for an end to executions: 85 thousand signatures collected. PHOTO

He also expressed his dissent Olivia Wildeactress and director

Against repression too Kate Walshknown for Grey’s Anatomy, Private Practice and Thirteen

Jesse Eisenberg, actor. Among others, he also played Mark Zuckerberg in The Social Network

As well as Jason Momoaactor and model

Among the faces too Jada Pinkett Smith: Actress, singer and businesswoman and wife of actor Will Smith

Among the faces that appear in the video, also that of Samuel L. Jackson