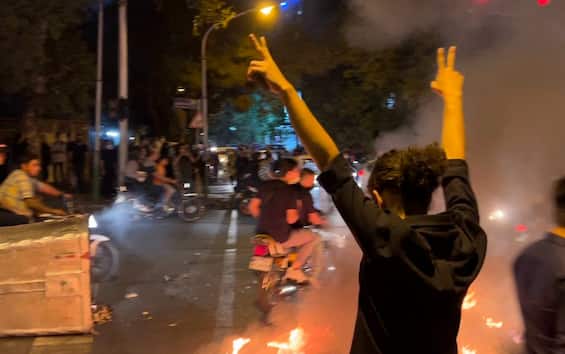 Protests continue over the death of Mahsa Amini, the 22-year-old Kurdish minority who died in Tehran on September 16 while under arrest for wearing the veil in a way that did not comply with the law. In tAll Iran women strip off their hijabs, set fire to their veils and cut their hair as a sign of dissent with a regime that systematically restricts women’s freedoms.

The beginnings of the protest

The first demonstrations started on Saturday, the day the young woman’s funeral was celebrated. The farewell ceremony was held in Saqqez, a city in the Kurdish province where Mahsa was born and raised. Iranian Kurdistan was the first battleground, but the protests soon crossed the borders of the region: from the province of Gilan to that of Yazd to the capital Tehran. On Monday, a more bloody phase of the conflict between demonstrators and police began. NGOs have declared that the victims of the clashes are five, while the local authorities have spoken of 3 deaths. The repression also leaves behind a trail of wounded: more than 75, according to Hengaw, an association committed to the rights of the Kurdish people. It is mainly young people who take to the streets in the name of Mahsa. The protagonists of the meetings are the Iranian girls who take the lead in the processions and lead the revolt, challenging the iron fist of the security forces. The spokeswoman for the Office of the High Commissioner, Ravina Shamdasani, yesterday denounced the work of the Iranian police, accused of having “fired real ammunition”, as well as having made extensive use of tear gas.

Iranian women protagonists of the demonstrations

The body of women is at the center of the protest that takes shape on the streets of the country and pours on social channels. These are often extreme and liberating gestures. Hijab bonfires light up Iranian nights for 5 days now. For many girls it is not enough to get rid of this object with which they live daily. Once removed from the head, they decide to burn it and wave it in flames as if it were a flag of freedom. In Kerman, in the East, the hair cut took place in the square, turning into a real collective ceremony. A woman surrounded by the crowd of protesters pruned her hair, a political act that has become endemic among the new generations. Singer Donya Dadrasan has entrusted her protest to social media. In a video of Tik Tok, armed with scissors, she let the locks fall one by one in front of the camera on the phone. She also urged her lei followers to voice the message of the Iranian girls, explaining that it was the “Islamic Gestapo” represented by the moral police who killed Mahsa.

Among the hundreds of arrested there is also Melika Qaragozlu, sentenced to 3 years and 8 months in prison for taking part in the demonstrations, as reported by her lawyer Mohammad Ali Kamfiruzi. You are accused of a national security attack. This is not the first sentence for the activist who has already known Iranian prisons. In August she was released on bail after serving a month in jail. She was arrested in July for claiming her religious freedom by posting a photo of her on social media in which she defied the obligation of the veil. She melika did not hesitate to join the protests of the last few hours, publishing a video of a few seconds with her head uncovered, a claim that cost her her freedom.

The context in which the Amini case exploded

The Mahsa Amini case exploded at a time of strong tensions between civil society and the establishment. On August 15, President Raisi, eager to give substance to his reputation as an ultra-conservative, signed a particularly restrictive decree that intervenes in a reactionary sense on the women’s dress code with a long list of prescriptions. Officially, women like Mahsa are detained for courses in which they re-learn how to wear the veil correctly and review the rules of conduct. Re-education actually turns into complete deprivation of personal freedom and re-education centers become gray areas within which, according to activists, the guests receive mistreatment and suffer torture.