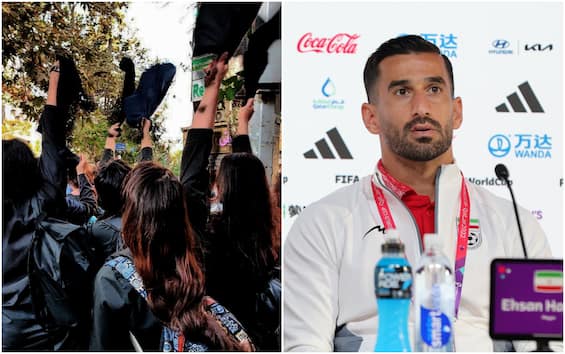 The protests that erupted in Iran on 16 September after the death of Mahsa Amini landed at the World Cup in Qatar, with the Iranian national team proclaiming that it wanted to represent the “voice” of its people. And tomorrow’s opponents, Southgate’s England, will kneel in the gesture born as a demonstration of the “Black Lives Matter” movement and then became a symbol of the fight against marginalization and racism. In Iran, according to the NGO Iran Human Rights, since the beginning of the demonstrations there have been 378 dead and over 15,000 arrested. Other human rights activists speak of over 400 victims, including nearly sixty minors, and 16,800 arrests.

Players of the Iranian national team could sing the anthem

The England-Iran match, scheduled for tomorrow at 2 pm at the Khalifa international stadium in Doha, looked like a date with history, with years of war, rivalry, confrontation, boycotts and sanctions. Over the months it has turned into a confrontation with the present which sees the power in Tehran engaged in a very harsh repression of the protests that spread after the death of 2-year-old Mahsa Amini. Speaking at the press conference on the eve of the day in Doha, defender and captain Ehsan Hajsafi swept away all the uncertainties by proclaiming the Iranian national team “voice of the people”: “We must accept the fact that the situation in our country is not good and that our people he is not happy – said Hajsafi – everyone is dissatisfied, but this is not a reason not to be the voice of the people here. And not to respect it”. Speaking on behalf of his teammates, the player said that “everything we have we owe to our people and we are here to work hard, fight, have good behavior on the pitch, score goals and be devoted to the Iranian people. I hope the situation will evolve as the people wish and that everyone will be happy”. Several Iranian players have expressed their support for the protest in the squares through social media, showing black bracelets during matches or refusing to sing the national anthem, a hypothesis that remains valid for tomorrow.

England coach Gareth Southgate has announced his decision to “kneel before the game, a strong message in favor of inclusiveness for young people around the world”. And if in Iran there is a struggle for the rights of all human beings, Southgate and his followers realize that even in England “life has become difficult for many, an economic recession is underway which affects many and therefore we would like our travel would bring happiness to people”.

But dissent from the world of sport also comes from an Iranian women’s basketball team that posts a photo of the entire group with their faces uncovered. “Teach your daughter that so-called ‘gender roles’ are nothing but nonsense – reads the Instagram post – You are precious and irreplaceable. If you are told otherwise, do not believe it. Do not hide. Stand up, keep your head up and Show them what you’ve got! Tell them you’re strong and powerful. You’re a free woman.” And to follow the hashtag #MahsaAmini.

The protest of the president of the Iranian Federboxe

Signs of dissent are also coming from Iranian boxing. The president of the local Federboxe, which is located in Spain where the junior world championships are taking place, announced his decision not to return to Iran: “I have decided not to return to Iran, to be the voice of those who are not heard by the authorities, especially the population of Sistan-Balochistan where dozens of innocent people were killed (80 according to some NGOs ed) – said Hossein Souri in a video – I could no longer serve in my beloved country, a system that easily sheds the blood of human beings”.

In Iran, the sixth death sentence for a protester

Meanwhile, Tehran’s Revolutionary Court today issued the sixth death sentence against a protester accused of having “the intention to kill with a knife to create fear and insecurity in society” during the protests. Such behavior, according to Sharia law in Iran, carries the death penalty, the semi-official Tasnim news agency reported.

Actress Hengameh Ghaziani arrested: she posted a video with her head uncovered

In addition, the Tehran prosecutor’s office today summoned some well-known figures in the country accused of having spread “false, undocumented and provocative comments” on social media in support of the protests. Among those reached by the subpoena are actresses Elnaz Shakerdoust, Mitra Hajjar, Baran Kowsari, Sima Tirandaz and Hengameh Ghaziani, the two former reform MPs Parvaneh Salahshouri and Mahmoud Sadeghi and the former Persepolis football team coach Yahya Golmohammadi. The Tehran judiciary then announced that the actress Hengameh Ghaziani was arrested: on Instagram she had posted a short video, which portrayed her bareheaded, with background music on women’s freedom.

SOS of activists for the Kurdish city of Mahabad

Since yesterday the Iranian Kurdish city of Mahabad has been under armed attack by the security forces of Tehran and the Guardians of the Revolution: the alarm was raised on social media by Iranian groups and activists, including Massih Alinejad, and by some personalities known as the famous former footballer Ali Karimi. According to these appeals, helicopters and even “heavy artillery” are being used on the city, even if there is currently no news of casualties. Mass funerals were held in Mahabad for Kamal Ahmadpour, who was recently killed in anti-regime protests sweeping across Iran, with sit-ins and barricades across the city. In some videos released by groups and activists, continuous gunfire can be heard, as well as the screams of women and children. Electricity and internet were cut off in Mahabad during the night. According to activists, the situation is also critical in other Kurdish-Iranian towns, such as Boukan, Saghez, Divandareh and Piranshahr.