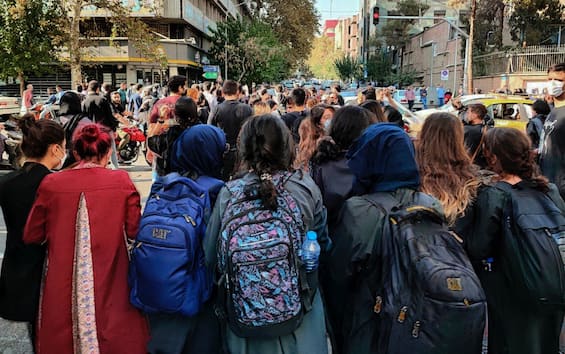 Protests continue in Iran, where in many cities the demonstrations that broke out five weeks ago for the death of Mahsa Amini continue, the 22-year-old Kurdish woman who died three days after being arrested by the moral police for not wearing the Islamic veil correctly. The appeal launched this morning by the activists, despite the limits and bans on Internet access and the authorities that have blocked access to Instagram and WhatsApp apps, was welcomed in many areas of the country, while the regime speaks of ” sweep away the rioters ”.

Protests were organized not only in the capital Tehran, but also in Karaj, Rasht, Ardebil, Ahvaz and Mashhad. “Women, life, freedom” was the slogan most shouted by university students from various universities, from Tehran to Marivan, up to Isfahan. School students also took part in demonstrations in some cities, notably Ardebil, where a student died in hospital on Wednesday after being beaten by security forces, while another student is in critical condition. Traders went on strike in Saghez, Mahsa Amini’s hometown in Kurdistan province, and in Mahabad (north), according to online media 1500tasvir. “Schoolgirls from Ney village in Marivan (west) set street fires and shouted anti-government slogans,” wrote Hengaw, an Iranian Kurdish rights group based in Norway.

The appeal of the activists

The call for protest came in the morning, a new appeal after Mahsa Amini’s death fueled the largest wave of street protests in the country in years. Despite the ban on access to Internet services and platforms such as Instagram and WhatsApp, the activists managed to launch an online appeal under the slogan “The beginning of the end!”, Inviting them to participate in today’s protests, to gather at the points in to which the security forces are not present and to chant “Death to the Dictator”, in reference to the supreme leader of Iran, Ayatollah Ali Khamenei. “We need to be on the streets, because the best VPN these days is the street,” they said, referring to virtual private networks used to bypass Internet restrictions.

The regime: “Ready to wipe out the rioters”

But the regime openly threatens the protesters. Hasan Hasanzadeh, commander of Tehran’s Rasulallah unit, a division of the Islamic Revolutionary Guards Corps (IRGC), said that “if these forces take to the streets, all the rioters will be wiped out.” Furthermore, in an interview with Fars, General Hassan Karami said that some of the men sent to the streets and squares “come from the special police unit, which has the task of dealing with the rioters, who protest against the death of Mahsa Amini ”and have shown that they are“ capable of dealing with terrorist demonstrators ”. Some videos posted on social media showed men dressed in black who, in collaboration with the Basij police (mobilization militia), violently attacked the demonstrators. Unofficial reports claim that they are members of the Revolutionary Guards. The “rioters, armed and trained, are just wasting the huge amount of dollars they receive from the United States and Western countries,” Karami added.