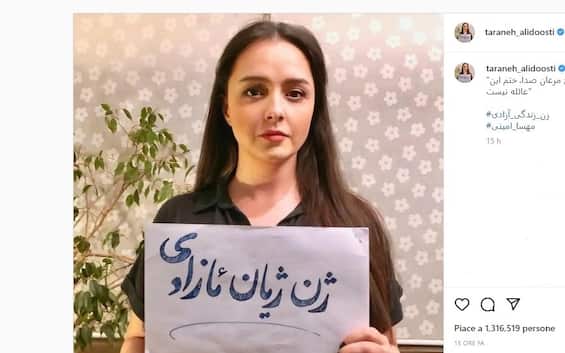 Taraneh Alidoosti, one of the most famous Iranian actresses, star of the film “The salesman” by Asghar Farhad which won the Oscar in 2017, posted on Instagram an image without a veil and a sign with the words in Kurdish ” Jin. Jiyan. Azadi “(Woman. Life. Freedom).

The popular actress’s gesture comes after weeks of harsh protests in Iran following the death of Mahsa Amini, the girl who lost her life while in the custody of the moral police for not wearing the veil correctly. Alidoosti herself, a few days ago and always on social media, had declared that she would remain in Iran at “any price”, explaining that she wanted to stop working to help the families of those who were killed or arrested in the repression of protests.

Alongside “families and prisoners and people killed”

“I am staying here and I have no intention of leaving,” wrote the 38-year-old actress, specifying that she has a passport or a residence abroad. “I’ll stay, I’ll stop working. I will be alongside the families of the prisoners and the people killed. I’ll be their lawyer ”, she added later. “I will fight for my home. I will pay any price to defend my rights and, above all, I believe in what we are building together today ”, was her message.