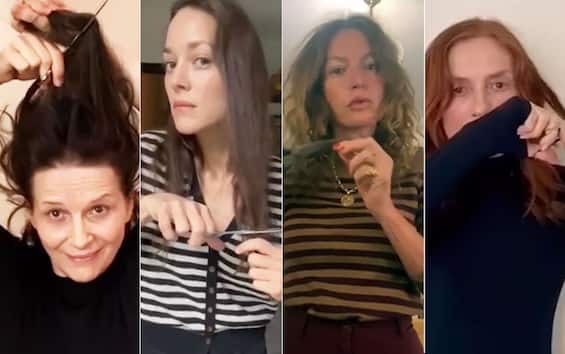 The scissors cut locks of long, short, straight, curly, blond, red, dark hair, while the proud and painful Hello beautiful sings about freedom. In the video posted on Instagram “in solidarity for the freedom rights of Iranian women and men”, the actresses Juliette Binoche, Marion Cotillard, Isabelle Huppert, Jane Birkin, Charlotte Gainsbourg and other protagonists of French cinema have cut their hair to protest against the Tehran regime and to support the women who have risen after the death of the 22-year-old Mahsa Amini. Last September, the moral police arrested the Kurdish girl for not respecting the strict dress rules of the Islamic Republic, which oblige women to wear the veil. The inappropriate leaking of a lock of hair from the headdress degenerated into the death of the young woman, who according to the official version of the Iranian authorities was instead caused by a heart attack, however, denied by the witnesses and her family. The tragedy sparked violent demonstrations and repression in Iran and aroused solidarity around the world.

The social appeal posted on Soutien Femmes Iran’s Instagram profile with the hashtag #HairForFreedom reads: “Mahsa Amini was a 22-year-old woman. On September 13, she was arrested and abused by the moral police until her death. She had only been accused of wearing the veil inappropriately. She died from showing a few strands of hair. Her death has outraged and moved Iran and the world. Since Masha’s death on September 16, the Iranian people, women in the lead, have been demonstrating putting their lives in danger. These people ask for nothing more than access to the most essential freedoms. These women, these men, are asking for our support. Their courage and their dignity oblige us. It is impossible not to denounce this terrible repression again and again. Deaths and deaths number by the dozen, and among them are children. The arrests only increase the number of prisoners who have already been held in total illegality and are too often tortured. So we decided to respond to the appeal that was addressed to us by cutting some of these locks too “.

The personalities of French cinema have expressed solidarity with Iranian women and civil rights activists also with an open letter signed, among others, by the screenwriter Audrey Diwanby the director Louis Garrelby actresses Juliette Binoche, Marion Cotillard, Isabelle Huppert and Léa Seydoux and the director of the Cannes Film Festival Thierry Fremaux. “We, producers, actors, directors, technicians and distributors, festival leaders and the entire French film industry wish to collectively express our support for the Iranian women who today fight for their freedom by risking their lives and the Iranian people who are courageously embracing. their revolt. We ask all those who are upset by the murder of Mahsa Amini and the massive, brutal and murderous repression ordered by the Iranian authorities, to express their solidarity with the Iranian people loud and clear. Zan, Zendegi, Azadi. Woman, Life, Freedom. May these words sung by the Iranians and collected by all the protesters make it possible to put an end to this unbearable coercion and finally open a new era in Iran, and wherever women are victims of obscurantism. This universal struggle for women, for life and for freedom is also ours ”.

THE REVOLT IN IRAN AND THE REACTIONS OF THE GOVERNMENT

Even in Iran, personalities from the world of entertainment have expressed their dissent. The Iranian Oscar-winning director Asghar Farhadi posted a video on Instagram to plead for solidarity with the protesters, while the actress Fatameh Motamed-Arya he lifted the hijab from his head as he delivered the eulogy of a colleague. Again, the Iranian actress and activist Nazanin Boniadi urged an international reaction: “I believe that the death or killing of Mahsa Amini in Iran has touched the heart of everything we hear about our rights being taken away from us, how fragile our freedoms can be”, and he added “and in particular, I believe, women’s rights”. The actress Golshifteh Farahaniexiled for acting without a veil in a major international production with Leonardo Dicaprio, he tweeted instead: “Iran has seen many oppressive regimes and rulers. Iran has been attacked by many heartless invaders throughout history. But the Islamic Republic wins the trophy for the most catastrophic period this country has ever experienced. And by chance, we were born at this very time. “The Iranian government later threatened measures against the” celebrities who fueled the flames of riots and those who sign large contracts “, who have never before openly expressed positions. The protests, however, do not come only from the cultural and media personalities of the country, but also involve Iranian girls who, in addition to cutting their hair, have turned the middle finger (an act considered obscene) against the images of the ayatollah Khamenei or have removed, trampled, torn or set fire to the veil.

“To the women of Iran, we see you” wrote the actress in an Instagram post Angelina Joliewhile modeling it Bella Hadid replied a tweet from Céline Semaan on women’s freedom and right to choose. The protests also involved Italy, where the actress Claudia Gerini made the symbolic gesture of cutting a lock of hair to send it to the Iranian embassy in Rome, and Europe, where the Swedish MEP Abir Al-Salhani he cut off a lock of hair and called on his colleagues to action: “We peoples and citizens of the European Union call for an immediate and unconditional end to all violence against women and men in Iran. Until Iran is free, our fury will be greater than that of the oppressors. As long as Iranian women are not free we will stay with you. Jin, Jiyan, Azadì. Women, life and freedom! “