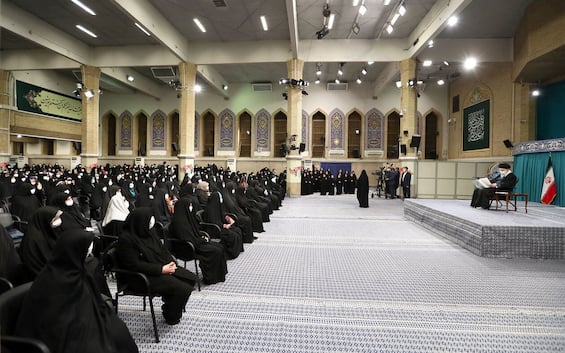 The Supreme Leader of the Islamic Revolution, Ayatollah Seyyed Ali Khamenei, met today (on Mother’s Day) with a group of Iranian women and female elites active in scientific, social and cultural areas. This is what the state agency Irna writes, reporting a photo with the ayatollah speaking in a large hall in front of women with their heads covered and their faces hidden by masks. Khamenei called for greater participation of women in various political and decision-making levels in the country, stating that “this is an important thing”. And again: “The modern Western world, self-righteous supporters of women’s rights, should be blamed for the situation of women in the West, as it has truly harmed them, they are suffering.”

With the protests that began precisely because of the death of Masha Amini, the 22-year-old killed for having “worn badly” the veil, the ayatollah reiterates the duty to wear the hijab: “It must be observed, because it is a religious necessity. It is Sharia and there is no question of his obligation.” During the recent “clashes – said Khamenei – the enemies hoped that women would not wear the hijab but they were slapped”. “It is not fair – he added – that some women do not observe the full hijab, but we must not say that they are against religion or the Islamic Revolution. They are our daughters”.