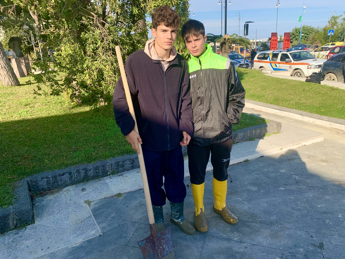 (from correspondent Elvira Terranova) – “We couldn’t stay at home doing nothing, while our comrades were left homeless. So we organized, in a few hours, a whatsapp group to ask if our friends and companions would like to participate in helping us shovel the mud and help our fellow villagers trapped in the debris and mud”. Camillo is a 16-year-old high school student who, with his friend Andrea, also 16, who attends the Accounting Department, decided to organize a group to shovel the mud after the landslide that hit Casamicciola on Saturday at dawn. They’re called the ‘mud angels’ around here. There are almost two hundred of them and for three days they have never stopped to help displaced people and people who have their homes and shops submerged in mud. Their faces are tired and they look sad, but they don’t stop.

“We believe that in a moment of great difficulty the whole community should lend a hand, and we did – they say in unison, while holding spades in their hands to shovel the mud – Yesterday we were in Piazza Bagni, both in private homes but also at Manzi where there is still a lot of mud”.

The two ‘angels of the mud’ complain about the lack of means to be able to work for the removal of mud and debris. “Shovels, brooms, gloves and even rubber boots are missing – says Andrea – everyone brings what they can”.

‘We just want to give support to the community’

But why this decision? “It’s simple – say Camillo and Andrea with disarming sincerity – we just want to give support to the community. That’s all. It’s the least we can do after what happened in Casamicciola”. This afternoon the boys will go to via Celario, one of the most affected areas, where the mud reaches up to two meters. And what do they say about all the controversies about unauthorized use? “Now that there are still people under the mud, we have to think about recovering these people – they explain – and then we think about illegal activity and everything else”.

“Our parents supported us in our choice – they add – they believe we did well”. On the whatsapp group there are more than two hundred. “Not everyone participates – explains Camillo – but we are many”.

And the evening? “We get home and we’re very tired – they say – but that’s fine with us…”. Here they are, the mud angels of Ischia.