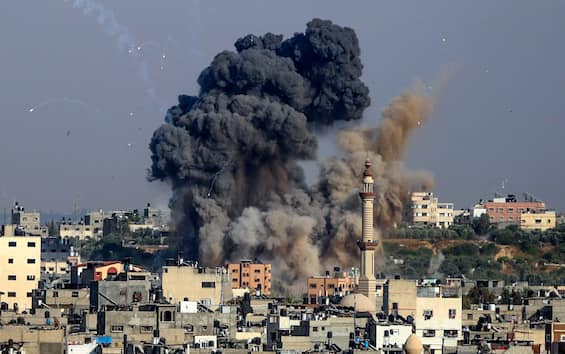 Since mid-March 2022 in the Middle East, a series of clashes and terrorist attacks has brought attention to the hostility between Israel and Palestine, which is rooted in time, has generated episodes of violence and has led in recent decades to a series of wars that they also involved other countries. The reasons for this contrast are very complex, they are intertwined with religious issues and, over the years, they have ended up mixing with other interests as well. At the base, however, there is a territorial dispute, which broke out with the creation of the State of Israel and further complicated with the so-called “six-day war”.

The origins of the conflict

When talking about the Israeli-Palestinian conflict, the so-called Balfour declaration of November 2, 1917 is often taken as the ‘starting point’. The post in an article on this document, it was a text of just 67 words with which the British government, through the mouth of Foreign Minister Arthur Balfour, informed Lord Walter Rothschild, one of the main leaders of the Jewish community in the country, that it saw “with he favored the establishment in Palestine of a national home for the Jewish people ”and would have worked“ to facilitate the achievement of this aim ”. The letter, which also hid strategic interests, was written at a time when some argued that Jews had to return to live in the Holy Land. At the same time, he specified that nothing should be done that would prejudice “the civil and religious rights of non-Jewish communities in Palestine, nor the rights and political status of Jews in other nations”. In the following years, several Jews moved to this area, but this hypothesis remained on standby until, after the Second World War, the UN General Assembly approved a plan to partition Palestine. Thus was born the State of Israel, which was proclaimed on May 14, 1948.

Israel’s constitution was immediately questioned and several Arab countries decided to attack. Although the state had recently been created, it had been preparing for a conflict for some time and managed to win it the following year by conquering a larger territory than what the UN plan had assigned it. Palestinians commemorate this defeat every year on the day of the ‘Nabka’ (catastrophe), which falls on May 15, but this conflict was not one of those that Israel and some Arab countries fought in the context of the Palestinian question. In 1956 Israel crossed the Egyptian border with the support of France and the United Kingdom, causing the so-called Suez crisis to explode. In 1967, the Six Day War broke out, a conflict that arose for reasons similar to those that had contributed to the tensions of 1949 and led Israel to conquer other territories, including the West Bank. Contrary to what had happened previously, the international community did not recognize the territorial conquests, but Israel continued to control them, which is why we have been talking about ‘occupied territories’ ever since. The never subsided hostilities sparked a new conflict in 1973, known as the Yom Kippur War, which saw Israel prevail once again. In each of these conflicts, the new state had also confronted Egypt but starting from the second half of the seventies relations between the two countries began to normalize thanks to the Camp David agreements. Egypt thus became the first Arab country to recognize Israel, but the peace treaty was not well received by everyone. President Sadat, who had started the ’73 war to recapture the Sinai peninsula and “restore the rights of the Palestinian people”, was branded a traitor and killed by some Islamic fundamentalists. His country was later expelled from the Arab League.

Neither the case of Egypt nor the military failures of other countries silenced the Palestinian claims which, in the following years, were also carried forward by new realities, such as Hamas, and also took the form of armed struggle. Tension rose again to worrying levels on December 9, 1987, when discontent sparked the first “stone intifada” and protesters began throwing stones and Molotov cocktails at Israeli law enforcement. Officially, the casus belli was an accident in which an Israeli military force truck hit two vans carrying Gaza workers to Jabaliyya, a refugee camp of 60,000 people, killing four Palestinians. Behind the uprising, however, there was a growing discontent also due to the occupation by Israel of the territories conquered in the 1967 war.

As the events of these days show, the parties have never reached an agreement and continue to clash. However, on September 13, 1993, some hoped for a resolution of the conflict. That day, Ytzhak Rabin, Israeli prime minister, and Yasser Arafat, leader of the Palestine Liberation Organization (PLO), signed the Oslo accords in the courtyard of the White House. The date was historic because, for the first time, Israel recognized the PLO the right to rule over some of the territories it had occupied and the latter in turn recognized Israel’s right to exist and promised to renounce the use of violence. to create a Palestinian state. In 1995, the two leaders signed another series of agreements, known as Oslo II, but the peace process broke down. In the same year, Rabin was in fact killed by a religious fanatic, the PLO was accused of being an accomplice in the armed struggle and the following year, in Israel, a politician who had repeatedly called those compromises a mistake became prime minister: it was a matter of Benjamin Netanyahu.

The 2000s and the latest events

In 2000, the tension began to rise again. In July, a new round of negotiations at Camp David failed and about three months later, Israeli leader Ariel Sharon went to the esplanade of the Mosques, a place historically claimed by the Arabs and considered sacred. His presence was interpreted as a provocation and on September 28 there was a new protest that started the second intifada, with new guerrilla actions and terrorist attacks. In 2014, a real conflict broke out, which among other things caused 100,000 displaced persons, while a new intifada returned to talk in 2015 due to another series of clashes, which intensified due to the failure of new talks of peace and caused more casualties. A new escalation was also feared in 2017 when the then US President Donald Trump announced his intention to move the US embassy to Jerusalem, effectively recognizing it as the capital of Israel. The risk then rose again in June 2020, when Prime Minister Benjamin Netanyahu announced a plan to annex Israeli settlements in the West Bank that went in the opposite direction to that undertaken with the Oslo accords and hindered the “two-state solution”. As in the past, there were new tensions interspersed with moments of peace. Instead, in 2021 the fight returned. This time, the spark was the risk of some Palestinian families being evicted from Sheikh Jarrah, a neighborhood in East Jerusalem. The ensuing war lasted 11 days but resulted in more than 200 deaths.

The alert returned to high in early 2022 because, since mid-March, there have been some very close terrorist attacks against Israel and Israeli forces have among other things killed three Palestinians in the West Bank saying they were armed. Naftali Bennet, the Israeli prime minister, is so worried that he has invited Israelis to go around armed, but the clashes also jeopardize the strength of his coalition government. Violent clashes with the Israeli police also broke out on the Temple Mount in Jerusalem, with hundreds of injured. The tensions also led to a new exchange of accusations between the parties and the bombing of a site in the Gaza Strip in response to the launch of a missile by Hamas. Neither episode would have caused any deaths.

The Agreements of Abraham

It is still not possible to find a solution to the Palestinian question, but in recent years progress has been made with regard to relations between Israel and the Arab countries. More specifically, in September 2020 Israel, the United Arab Emirates and Bahrain signed the so-called Abrahamic Agreements under the auspices of the United States. According to President Donald Trump, that agreement marked “the dawn of a new Middle East” also because, for the first time, two Gulf countries recognized Israel. Almost two years after that event, the foreign ministers of those countries, Morocco and Egypt met in the Israeli town of Sde Boker, a sign that that process has not stalled.