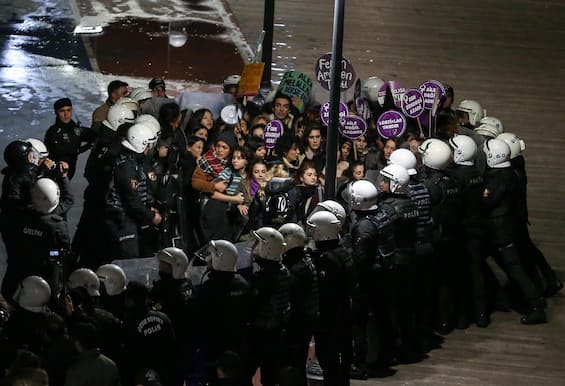 Dozens of protesters gathered to celebrate the International Day for the Elimination of Violence against Women were arrested in Istanbul, according to AFP. A massive array of riot police attempted to prevent the gathering called in the emblematic Taksim Square, which had not been authorized, with the installation of barriers and barriers that blocked the streets in a vast perimeter starting from the banks of the Bosphorus. At the appeal of the ‘November 25 Platform’, a coalition of feminist movements, hundreds of demonstrators, some veiled, sang “Woman, Life, Freedom” in Turkish and Kurdish, taking up the anthem of Iranian women fighting against the regime of the mullahs.

Blocked by a police cordon under Taksim Square, a group of women activists displayed a banner praising freedom and against “patriarchal violence”. Other banners carried slogans against “household slavery” or against gender-based violence. “This country is ours, this world is ours, the 21st century is the century of women and nothing can change that,” one activist shouted. With a crackdown on most public gatherings, women and LGBT movements are the latest to call large protests in Turkey.