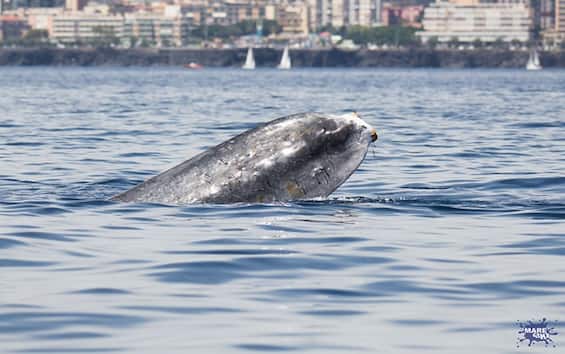 An innovative system that aims to save whales, especially those transiting in the waters of San Francisco, from collisions with ships. It is called “Whale Safe” and represents a detection mechanism powered by artificial intelligence, tested right in the bay of the Californian city.

In the intentions of the experts, as reported by the “New York Times”, the system will have to warn the large ships, which ply the waters of the area, of the presence of whales in the vicinity, in an attempt to completely reduce the deaths of animals. In fact, four whales recently died near San Francisco after some boats crashed into the cetaceans. Although the true death toll is likely to be much higher, as whale carcasses often sink to the sea floor. Among the most recent victims, continues the NYT, is Fran, who ran aground last August about 25 miles south of the Golden Gate Bridge. The humpback whale had a broken neck, most likely due to a violent collision with a ship.

The increase in ship traffic and climate change

In recent days, just 25 miles offshore from the Golden Gate, a particular yellow buoy has been activated. Douglas McCauley, director of the Benioff Ocean Initiative at the University of California, Santa Barbara, oversaw its operation. The buoy, connected to an underwater microphone, is an integral part of “Whale Safe”. The project was developed because, according to the researchers, just near San Francisco, the increase in ship traffic coupled with climate change has caused cetaceans to seek food closer and closer to the coast, thus putting them in danger. That’s why Dr. McCauley and a network of his collaborators developed “Whale Safe,” which has already been operating in the Santa Barbara Canal since 2020. The system provides near real-time data on the presence of whales and sends alerts about sailors or whales. shipping companies. The hope, experts say, is that if the ship captains are warned of the presence of whales in the area, they may decide to change course or slow down their approach to the port, a maneuver that would make any fatal collisions less likely.

“Whale Safe has the particularity of being able to monitor the situation in near real time, providing clues about where the whales are 24 hours a day. This is a truly unique aspect and offers a great deal of information to share with ships entering and come out of the bay “, confirmed Maria Brown, an expert involved in the project. The objective of the experts, the NYT again points out, is now to expand the monitoring of this system to all areas of interest in the United States and Canada to safeguard the life of whales.