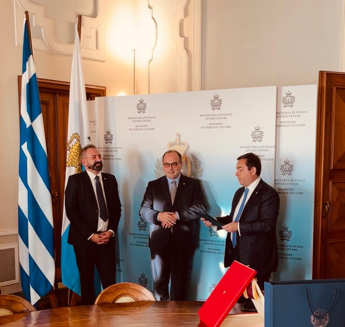 The Italian-British entrepreneur Maurizio Bragagni, president of the Esharelife foundation, was awarded an honor by the Greek government “for his commitment to combating hardship and destitution in the poorest areas of the world and for supporting migrants. “. The Minister for Immigration of Greece, Notis Mitarachi, presented Bragagni with the Ministerial Commendation Medal B Class on the occasion of his official visit to the Republic of San Marino, a country of which the Tuscan Bragagni is the consul in the United Kingdom. On the Titan the member of the government of Athens was received by the Captains Regent and by the Foreign Secretary of the Republic of the Titan, Luca Beccari.


“Maurizio Bragagni has been engaged for years in an intense charitable action, through the Esharelife Foundation, to reduce poverty by eliminating those situations of hardship that push, especially in Africa, many people to abandon their land and their people to seek fortune elsewhere by putting his life is at risk “, explained Minister Mitarachi, also underlining the role played by the entrepreneur in” strengthening bilateral relations between Greece and San Marino “.

Bragagni said he was “honored by this recognition of a work that Esharelife has been carrying out every day for years in favor of those who suffer, are in need and seek a better future through human promotion, education and training. A job that it does not meet limits in the religion, nationality and sex of the people we try to help to build a better future for them and their families “. Among the various projects supported by Esharelife, there is that of the NGO AVSI in a very poor area of ​​Kenya allowing a thousand children, without any distinction of sex and race, to have an education and to do an apprenticeship.