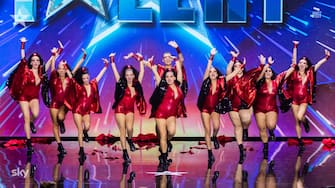 The H Family Crew is united in diversity and during the performance, the young group shows precision but also a lot of skill. Four yes

Puns in industrial quantities are served by Lorenzo. Funny and ironic, the young artist conquers the stage and the judges: 4 yes for him

Maryna and Tetiana present their number to the judges, a performance based on mutual trust

Italia’s Got Talent 2022 kicks off with judge Elio, the new entry “eliena”

It is in fact together, supported by each other, that the two acrobats show their skill in a game of balance never seen before. Four yes for them

Italia’s Got Talent 2022, the golden edition kicks off with Elio in the jury

Francesco Pandolfi is forty-five years old and is a martial arts teacher. By showing him he shows the IGT judges how to defend against a potential attacker. 2 yes and 2 no for him

Branco Ottico takes the stage of IGT to give the new judge a fantastic passport photo. The result is amazing despite Elio’s concern. 3 yes for them

All the news on Italia’s Got Talent

Giuseppe Pecoraro is 55 years old and has a hidden talent. To the rhythm of the music, the man shows a number that convinces the judges. 4 yes for him

Leonardo Togni takes the stage carrying his bed behind him. His exhibition of him consists of showing the judges what he does every night before going to sleep

His double flips and the many stunts conquer the judges and the public who at the end of the number stand up for a standing ovation. 4 yes!

The two Spanish dancers bring danger and adrenaline to the stage mixed with talent and a lot of courage. 4 yes for them

Maria and Fossati and Manuel Catalano are part of the Italian institute of technology and have brought their alters on the stage of IGT, two humanoid robots that demonstrate that they know how to complete a simple daily action. 4 yes for them

Davide Battista is 14 years old and has a great passion for jazz and more. With his trumpet, the young boy performs Madame’s piece, Voce. His performance amazes the judges in particular Mara Maionchi who decides to press the Golden Buzzer and send him directly to the final