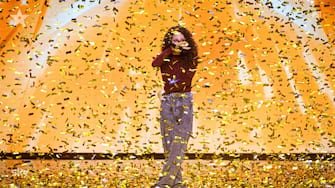 With his formidable performance, Antonio Vaglica brings out everything inside. Feelings and emotions in a singing performance that amazes the judges and after four yes, Elio can only press his first Golden Buzzer. Antonio is the first IGT finalist

Italia’s Got Talent 2022, the new season kicks off with Elio on the jury

The 2 Be King arrive on the stage of IGT hooded and then undress to the rhythm of the music. A performance, however, that does not completely convince the judges: three no and one yes from Elio

Italia’s Got Talent 2022 kicks off with judge Elio, the new entry “eliena”

Zena Campedelli and her dog Frida simulate a synchronized robbery in a “museum” to the notes of the pink panther soundtrack. Four yes for them

Italia’s Got Talent 2022, the golden edition kicks off with Elio in the jury

Antonio is the first IGT 2022 finalist

Marco Liotti is a nutritionist who with his doctor’s coat and his dietary advice leads to a singing “all fruits”. Three no for him, the only yes for Elio

All the news on Italia’s Got Talent

Team South places an emphasis on OCD through the art of dance. Sharing limits is the right move to overcome them. Four yes for them

Canio is the most creative engineer there is. With its mirror number it conquers the judges and four yes

The Cantering Choir pays homage to Rome with a slightly Venetian and a little Trentino song, their performance is so flawless that Elio expresses the desire to sing with them. Four yes

The Wizard Lupis impresses the judges with his magic number so much that they gasp. For him four yes

Simone Sanfilippo and Serena Maso bring 4 different salsa styles to the IGT stage in 100 seconds. Four yes for them

The Spotlight Team are freelancers aged 11 to 30 and come from Nice. Their performance captivates the judges and the public who explode into a standing ovation. Four yes for them

Leonardo Maria Frattini sings a beautiful serenade to Mara Maionchi, conquering not only her but also the other three judges. Four yes

They are the Clinique Sport Academy and with their performance they conquered the judges and 4 yes!

Davide Varruccio is an animal lover and his relationship with Brave has lasted for more than four years. A time necessary to prepare the number that led to the stage of IGT. Four yes for him