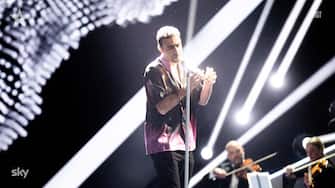 The first competitor of the IGT2022 final is the Golden Buzzer by Frank Matano Medhat Mamdouh, the young Egyptian managed to perfectly combine flute, beat box and classical music and opened the dance of a challenge with talent strokes.

WATCH THE VIDEO: Italia’s Got Talent, here is who is the winner

Davide Inserra conquered the breakdance podium and according to Federica Pellegrini also the 2024 Olympics!

The scenography they chose for this thrilling issue could not have been more apt: a volcano is what acts as a platform and also a spectacular scenery for Holler and Kimberly Zavatta. Brother and sister, they performed an incredible acrobatic number on roller skates. They received the first Cumulative Golden Buzzer in the history of the program.

Italia’s Got Talent, Holler and Kimberly are the cumulative Golden Buzzer of the judges

Umberto and Damiano made the low budget musical their strong point. A number much appreciated by Elio who loves those who do a lot with few means: “a bit like grandma’s old dishes, who could make delicacies with little. You are exactly that stuff”.

Italia’s Got Talent 2022: the performance of Umberto and Damiano

Antonio Vaglica’s voice on the notes of Whitney Houston is something that is impossible to resist. “I had abandoned myself to an enthusiasm that I usually don’t usually do, but I confirm. On the contrary: it has increased”, Elio affirms with emotion. Antonio wins the coveted title at the end of the final by conquering the top step of the podium.

Simone Corso, Sardinian dancer deaf from birth, can dance only thanks to the vibrations he perceives. He is Lodovica Comello’s Golden Buzzer and she introduces him, saying that Simone is the incarnation of Italia’s got talent. Simone is the third classified of the 2022 edition of IGT.

Temple London, winners of the eighth and final episode of Audizioni, amaze everyone again. “Exceptional, exceptional”, exclaims Elio. I am a London father and son, kung fu experts. Their choreography is in perfect balance between spectacular acrobatics and Zen philosophy.

Italia’s Got Talent 2022, Giorgia Fumo and Temple London in the final

The number with Fellon Rossi’s crossbows is something never seen before. In fact, Fellon is the only woman in Europe to perform with numbers of this kind. It is a very dangerous discipline, in which the adrenaline component is certainly not lacking.

Italia’s Got Talent 2022, the finalist of the sixth episode is Fellon Rossi. PHOTO

Francesco Fontanelli wanted to surpass himself: he chose Frank Matano, the most expert in illusionism among all the judges, to amaze him with a card game. “Your number is one of the most beautiful numbers I’ve ever seen live”, comments Matano. Francesco is the runner-up of the 2022 edition of IGT.

Italia’s Got Talent 2022, an exhibition by Francesco Fontanelli

Davide Battista, 14, played a piece by Måneskin for the IGT final.

Giorgia Fumo is back to make us laugh with her irresistible monologues. This time Federica Pellegrini, close to marriage, enters her crosshairs. Giorgia focuses on the wedding theme. And she proves once again that she knows a lot about this very delicate topic for the female world!

Federico Martelli returns to the IGT stage with a 2.0 version of his hit “Bello Bello”. “Federico is like Kanye West: he churns out hits one after the other,” says Frank Matano.

Italia’s Got Talent 2022, the finalist of the third episode is Federico Martelli