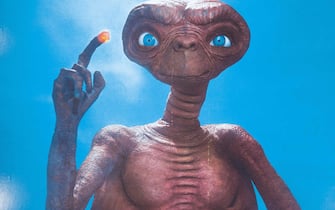 ET the Extra-terrestrial – Steven Spielberg signs one of the great cinema masterpieces of all time, winning 4 Oscars and becoming the highest-grossing film in 1983, surpassing nothing less than Star Wars! A tender and exciting film whose plot centers on the splendid friendship between a child and an alien stranded on planet Earth. As if to say that sometimes the winning weapon of a film can only be contained in its simplicity. Like certain fairy tales that we will never tire of listening to

1982 ROUND AND RETURN: Sky TG24 special on Italy’s achievement at the World Cup in Spain

Blade Runner – 1982 gives us one of the absolute masterpieces of cinema of all time, a cult for science fiction fans and more. Directed by Ridley Scott and starring Harrison Ford and Rutger Hauer, it was shot in 1981. Released in US theaters on June 25 the following year. Forty years later, Blade Runner impresses with the skill with which one of the most evocative and influential settings ever was created

The thing (The Thing) – A shape-shifting alien wreaks death, panic and destruction on an Antarctic science base. To address him, among others, a young Kurt Russell directed by master John Carpenter. We are facing a real cult of cinema. A fanta-horror, based on the short story The Thing From Another World (Who Goes There ?, 1938) by John W. Campbell, formerly behind the film The Thing from Another World (1951) produced by Howard Hawks

The Thing, John Carpenter would like to make the sequel

Talcum powder – The film, shot in 1982, arrived in theaters on January 22, 1983, is a true masterpiece of Italian comedy played by Carlo Verdone, and has become a true cult of Italian cinema. In the cast Eleonora Giorgi, Angelo Infanti and a very young Christian De Sica together with a host of formidable character actors including Mario Brega. With the music of Lucio Dalla and the Stadio

Poltergeist – Demonic presences – If there is a film that terrified viewers in 1982, it was certainly this one. The reason is obvious: perfect script written by a certain Steven Spielberg, direction entrusted to an attentive Tobe Hooper, perfect actors and above all everything that must be in a horror film or a house haunted by otherworldly presences, the sinister charm of the afterlife. , dead returning and of course the evil that hangs over a quiet American family And the dangers this time come directly from the TV

The 42 Scariest Movies Ever Made

Conan the barbarian – Without this character, perhaps Arnold Schwarzenegger would have remained a bodybuilder and would not have become the Hollywood star that we all appreciate today. Of course the film is not really a masterpiece but it has an irresistible charm that time has not affected. Few dialogues, many muscles (especially Schwarzy’s), sharp swords, severed heads, all seasoned with a strange and fascinating mythology. Then the script was written by a certain Oliver Stone.

Conan the Barbarian, a Netflix TV series is coming

Rambo – Beyond the legendary Rocky there is only Rambo that Sylvester Stallone transforms with his interpretation into another iconic character. A Vietnam veteran, haunted by war memories, has to contend with an arrogant sheriff who misinterprets her scruffy look. It is the beginning of an escalation of violence, traps and gunfights and explosions. A real action like no longer done

Rambo, all the characters. PHOTO

Tron – In times when we are moving towards the “metaverse”, this first Disney-branded feature film that talked about virtual reality could uncork a sarcastic smile. But if you think that this futuristic film has turned 40, then the perspective changes. It changes to the extent that certain films anticipate the times and in a certain way condition them. The Disney movie is one of them

Eccezzziunale … really – The Italian passion for football in a year like 1982, where the Azzurri won their third world championship, could only materialize in the cinema in the speech and in the face of the “terrunciello” Diego Abatantuono, an over-the-top emblem of the ultra diehard, who in this film is made up of three: the AC Milan player Donato, the Inter player Franco and the Juventus player Tirzan. A resounding success for a film that 40 years ago filled cinemas to the point of unbelievable. To the delight of director Carlo Vanzina, and of the public who still continue to love him today

Star Trek II – Wrath of Khan – The adventures of the ship Enterprise on the big screen hit theaters in 1979 with the first film directed by Robert Wise. But it is only with this third chapter directed by director Nicholas Meyer that the temperature of the action rises. The result is a compelling and entertaining film, considered the best of the entire Star Trek movie saga. Released in US theaters on June 4, 1982, the film will become the highest grossing of the series, a record that will last until 2009, the year of the reboot signed by JJ Abrams

Star Trek 4: confirmed the cast of the new film

Koyaanisqatsi – A kaleidoscopic and protean musical monument composed by the great Philip Glass for an “anti-narrative” fresco film by Godfrey Reggio: an undisputed masterpiece that opens up new and surprising ways of expression in the marriage between music and images

Pink Floyd The Wall – It took a director of the quality of Alan Parker to bring one of Pink Floyd’s best-known albums to the cinema. The Wall, released in 1979, tells the story of a rock star in the throes of social alienation. Pink, this is his name, is played in the film by Bob Geldof. It is said that the making of the film was really difficult and the filming was exhausting, not to mention some accidents on the set. However, the film was third at the box office (behind ET and the Gentleman Officer) and was met with positive reviews.

Italy 1982 – A blue story, clip and poster of the documentary

Entity – Considered by Martin Scorsese one of the scariest films of all time, the film is inspired by the real case of Doris Bither, who became famous, in spite of herself, for the violence inflicted by an invisible paranormal entity. Upon its release, the film sparked many protests from especially some women’s rights advocates who accused the film of showing violence against women in a too realistic way. Certainly, today, one could never make a film so conceived

The 20 most anticipated horror movies to be released in 2022

Darkness – After the first two chapters on the “trilogy of mothers”, Dario Argento returns with this third chapter to the yellow. The director, also thanks to his experience in horror, increases the dose of violence in the scenes. For this reason, Darkness had several problems with censorship, which called for cuts to the most shocking scenes

Dario Argento, the guardian of our nightmares on display in Turin

Moments of glory – Although the film was released in theaters in 1981, it was in the year of the Spanish World Cup that it received seven Oscar nominations and won four, including, surprisingly, the one for best film, as well as winning a Golden Globe and three prestigious BAFTAs. , including, there too, the one for best film. The film is also remembered for the famous soundtrack of the Greek composer Vangelis, which quickly became a real hit, and was then considered and used as an anthem of great sporting enterprises and, more generally, of sport.

Farewell to Vangelis, he signed the music for Blade Runner and Moments of glory