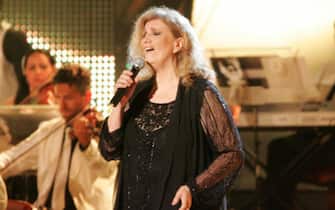 Iva Zanicchi is nicknamed the Eagle of Ligonchio. She was part of the quartet of the great Italian female voices of the sixties and seventies, with Mina, the tiger of Cremona, Milva, the panther of Goro, and Orietta Berti, the nightingale of Cavriago.

In 1962, on the encouragement of Gianni Ravera, he enrolled in the National Festival for new voices in Castrocaro. Her black voice hits the record companies of the new Ri-Fi label, who make her sign a contract

The singers of Sanremo 2022, Iva Zanicchi with the song I want to love you. PHOTO

Iva Zanicchi turns 80 and reveals: “They gave me a song”

Farewell to Milva, the “red” of Italian music

In the sixties he participated several times in Sanremo and ad A disc for the summer. 1967 opens with his first victory at the Sanremo Festival with the song Do not think about mepresented together with Claudio Villa

In this period a musicarello also turns, An all-gold girl

The Island of the Famous: Elettra Lamborghini and Iva Zanicchi commentators

On 19 July 1967 he married Antonio Ansoldi, artistic director of Ri-Fi, in Bologna. On December 19, his daughter Michela was born

1969 opens with a new participation in Sanremo. Iva proposes, paired with Bobby Solo, Gypsy. The song wins the nineteenth edition of the festival and conquers the public, enjoying great sales success

Italian singers of the 80s yesterday and today, here’s how they have changed over the years. PHOTO

In 1973 the tours abroad follow one another: France, Japan, Spain and Chile, to which is added the first tour in the United States and Canada. The climax is his concert in Toronto, attended by twenty thousand people and his performance at Madison Square Garden in New York, the temple of international music

The eighties are those of the consecration of Iva Zanicchi also as conductor. Since January 1987 you have been entrusted with the management of Ok, the price is right! and given the great success with the public it will remain there until 2000

1990 opens with the most successful edition of Ok, the price is right!. It also participates in the second edition of A roundabout overlooking the sea conducted by Mara Venier, in which he re-proposes I will stubborn And I will livereaching the semifinal.

In 1998 he also returned to the cinema participating in the film The last new year directed by Marco Risi, in which she plays the mother of the protagonist (Claudio Santamaria)

In 2003 he returns to the competition at the Sanremo Festival, 19 years after his last participation. Presents I was a tango

In March 2005 a double CD entitled 40 years of success: the first contains a collection of the most famous and most significant songs of Zanicchi’s career, the second the entire album I was a tango

In 2009 he is still competing at the Sanremo Festival, with the song I want you without love

In January 2020, on the occasion of the artist’s eighty years, a double CD entitled My best songs.

Starting from March 2021 he is columnist, together with Elettra Lamborghini and Tommaso Zorzi, of the fifteenth edition of The island of the famousconducted by Ilary Blasi on Canale 5

On November 4 and 11, 2021 November hosts the show on Canale 5 in two evenings Divaa one-woman show, whose title recalls that of the homonymous album released in 1980, and in which she retraces her career duet with other artists

The singers of Sanremo 2022, Iva Zanicchi with the song I want to love you. PHOTO