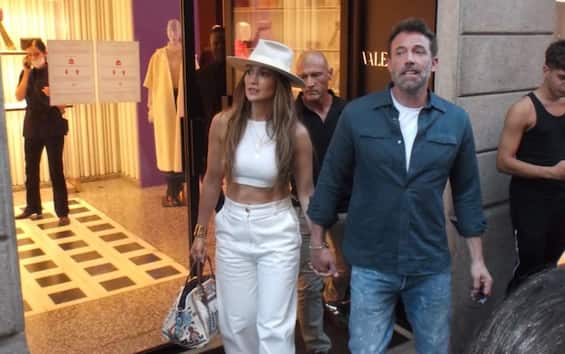 The honeymoon isn’t over yet Jennifer Lopez and Ben Affleck. Or rather, the second phase of the honeymoon has begun for the two, the one following the wedding in style, which lasted three days, which the two celebrated last weekend in the United States. After taking a break to look after their own work interests each, and having celebrated their second marriage in a few weeks to make friends and relatives happy, the two left for Europe. If the first honeymoon took place mainly in Paris, some brackets at the sea in Italy, now the Bennifers have decided to start their love holiday from our country, in particular from Milan. Not a random choice, but dictated by the couple’s desire to devote themselves to luxury shopping in the Milan Fashion District, a Mecca for all lovers of luxury shopping.

Relaxed and more in love than ever, the two made an appearance on the street Montenapoleoneone of the streets of the shopping most famous in the world. In fact, in this street in the center of Milan, the boutiques of the most famous brands of Italian fashion all over the world follow one another seamlessly. It is a must for all those who want to have a unique experience and who, of course, have a wallet that allows them to do so. But, ça va sans dire, the Bennifers certainly have no particular thoughts on that side. And so here, on a hot late summer afternoon, Thursday 25 August, the couple showed up hand in hand in the main street of the Milanese fashion district. Smiling and amused by the clamor aroused by their presence, they walked on the sidewalks in search of some particular garment or accessory to take with them on their return to the United States. It was 7 pm when the driver dropped them off in via Montenapoleone and at that time many of the boutiques in Milan are already preparing to close. It is not surprising that, on the other hand, many of them have made an exception to the rule with pleasure and have pleasantly stayed after hours to allow Jennifer Lopez and Ben Affleck to make their purchases, also because it seems they have been lavishly. rewarded for the pleasure. The two stopped to shop in the boutiques of Brunello Cucinelli, Cartier, Alberta Ferretti and Valentino.

In love and happy

The most interested in shopping, needless to say, is the singer, even if Ben Affleck still provides his contribution to the cause by showing himself to be involved in his wife’s choices. The actor bows, looks and suggests something Jennifer Lopez, while she lovingly strokes his back. But they also enjoy interacting with the crowd thronging outside the windows, showing them some of the purchases they would like to make, as if asking for amused advice. Just a few days ago, the fake news of a possible separation was spread, promptly denied. In the next few hours they are expected on Lake Como, at the home of George Clooney.