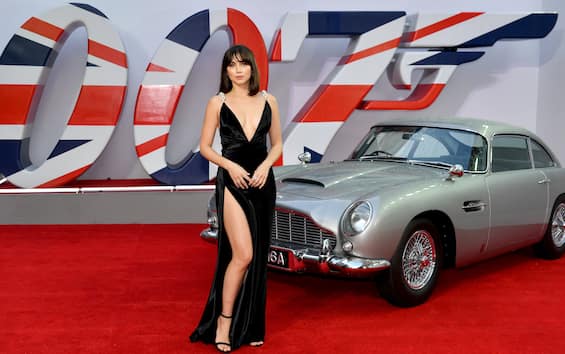 Ana de Armas opened up during an interview with the Sunsaying – exclusively for the English newspaper – that today it is not necessary to have a 007 film starring a female James Bond but rather substantial and significant roles are needed to be reserved for the actresses.

The diva doesn’t know who should replace Daniel Craig as James Bond, but she does know one thing: she shouldn’t be a woman.
The actress who is now in theaters alongside Ryan Gosling and Chris Evan in Netflix’s action movie “The Gray Man” (the streaming giant’s most expensive film) starred in the latest installment of the spy saga, “No Time to Die ”, with a steal role: that of the mysterious character of Paloma.
His speech is related to the female roles that are part of the 007 franchise, okay, but still holds true in general, even outside the Bond saga.

De Armas, 34, would like the roles of women in the franchise (and beyond) to be “brought to life in a different way.” Sun.
“He stole the show as a slenderly dressed secret agent No Time To Die last year, but that doesn’t mean actress Ana de Armas thinks the role of 007 should be given to a woman. On the contrary, she says: ‘There is no need for a female Bond’ ”, writes Rollings in the Sun.

The words of Ana de Armas

The actress who played Paloma in the film “No Time to Die” said in an interview with the newspaper The Sun the following: “There is no need for a female bond. There should be no need to steal someone else’s character[…]”.
De Armas explains that she would like to see the existing female roles in the franchise a little more consistent. “What I would like is that female roles in Bond films, even if Bond continues to be a man, come to life in a different way,” she said, adding: [ai ruoli femminili] a more substantial part and greater recognition was assigned ”.

The thought of Ana de Armas is shared by many and, as she herself points out, it could prove more interesting than the total upheaval of things, presenting for the first time a 007 spy in a female version.
The prospect he proposes proves to be tempting for the many fans who are clamoring for a spin-off dedicated to his Paloma.
“Many felt that her starting line in the film – ‘Stay longer next time’ – should really apply, to itself. But the Cuban actress will not have seen all the applause on social media, because she has turned her back on Twitter and Instagram “, underlines Grant Rollings on Sun.

The actress is not the main protagonist even in the new action film in which she stars. “The Gray Man”, the Netflix film just released in theaters and arriving on July 22 on the video streaming service (also visible on Sky Q and via the app on Now Smart Stick) stars two men: Ryan Gosling and Chris Evans. Just like a Bond Girl, also in this case de Armas is a “Gray Man Girl”: she joins the good spy, the undercover CIA agent played by Ryan Gosling.
De Armas’s character is CIA agent Dani Miranda, a professional who manages to tear down bad bits and give all the men in the film a hard time, while helping undercover agent Six. But she is not the protagonist, here.

Like her male co-stars, Ana wants to make those high-energy sequences real by performing as many stunts as possible. “It’s great to have a double do the dangerous things for you, but there’s something in there that you feel capable of,” she said at the Sun. “And you say, ‘I can do it. Let me do it. Let me try.'” For The Gray Man Ana trained a lot with weapons. But we repeat: also in this case the woman is in the back of the set, unfortunately …

Female lead roles only if strictly necessary (like Marilyn’s biopic)

Ana de Armas can be assigned leading roles in films that tell of female characters, for example the interpretation of Marilyn Monroe in the biopic “Blonde” could only have a female protagonist. It is she who stepped into the shoes of the most famous blonde in history, in a biopic that “will surely shock many Netflix viewers, since it will contain a rape scene”, underlines the Sun.

Director Andrew Dominik said, “It’s a challenging film. If the public doesn’t like it, that’s an audience problem. We are not running for public office. “

While the pandemic has hampered many careers, Ana’s has flourished: “I feel that during Covid I didn’t actually stop working at all.” Yet while she was working on “No Time To Die” her travel restrictions prevented her from returning to Cuba, where her father Ramon suffered from an illness (which the Sun says not to be linked to Covid).
Born in the Cuban capital Havana, Ana de Armas grew up in a small town on the coast of the island before moving to Spain at the age of 18 to pursue her dream: acting. Eight years later she moved to the capital of cinema, Hollywood. And that’s where her career took off. Hopefully, her enormous success will lead to her dreams of better female roles coming true. Both in 007 films and in cinema in general.

Ana de Armas had the honor of acting alongside Daniel Craig in the last chapter of the saga in which the actor-synonym of 007 is present.

“No Time to Die” marks Craig’s final farewell to the espionage epic. There are now rampant speculations regarding who will be chosen to pick up the prestigious baton. Clearly, hypotheses have also been advanced on a turnaround, following the example of “Ghostbusters”: why not choose a female James Bond? So a Jaime or Jamie Bond, that’s it.
De Armas is not alone in saying that the role should continue to be male.
Barbara Broccoli, longtime producer of the popular 007 franchise, had previously expressed doubts about the possibility of a non-male protagonist. “Bond is a boy,” she told Barbara Broccoli in an interview with the British newspaper The Guardian in 2018. “He is a male character. He was written as a male and I think he will probably remain as a male. […] Alright then. We don’t have to turn male characters into women, ”Broccoli added.
The producer of the 007 saga was the one who first of all brought up the need to create more female characters, outside the male protagonist.

In 2018, after the considerations of Barbara Broccoli entrusted to Guardian, also expressed the actress Rosamund Pike, saying essentially the same thing. “I think the character of James Bond is a man. Why not become a real female agent?”, These are the words of the actress who in 2002 played the role of Bond Girl in “Die Another Day” of 2002. Pike therefore expresses feelings similar to those of the producer Barbara Broccoli and those of the actress Ana de Armas.

However, a decision regarding Craig’s replacement will in all likelihood be a long way off. Last month Broccoli told Deadline that the production of the new film would take at least two years, if not more. And he had added that at the moment “no one is in the running” for the part. Neither woman nor man.