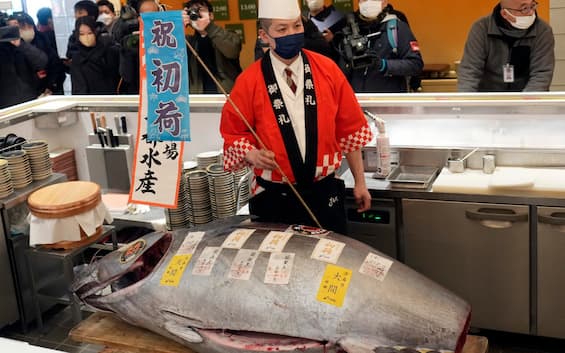 Signs of optimism from the traditional early-year auction at the Tokyo fish market, where the best specimen of bluefin tuna was purchased for just over 36 million yen, equivalent to 257,000 euros, more than double the January 2022 valuation. The 212-kilogram fish, caught off the port of Oma, in the northern prefecture of Aomori, exceeds last year’s 16.8 million yen quotation, a signal, according to operators, that heralds a recovery in consumption after the health emergency caused by the Covid-19 pandemic.

The president of the Yamayuki food conglomerate, and the head of the company that manages the Sushi chains Ginza Onodera, joint winners with the largest offer, expressed satisfaction, hoping for a gradual improvement in demand during the season for the entire sector. However, today’s result is far from the record set at the 2019 auction, the first in the new Toyosu fish market, after the transfer from Tsukiji, east of Tokyo, during which a tuna weighing 278 kilograms was sold for 333, 6 million yen, equal to 2.36 million euros.