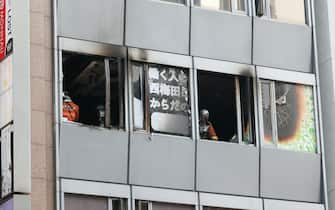 At least 27 people could have died in one fire flared up in a commercial property in the central district of Osaka, the main metropolis of Japan western. Local firefighters announced it

“Twenty-seven people are in cardio-respiratory arrest”a spokesman for the fire brigade told AFP. It is an expression used in Japan to speak of deaths not yet officially confirmed by a doctor. A twenty-eighth person would be injured

“The fire was identified at 10:18 am local time (5:18 am in Italy, ed) on the fourth floor of this eight-story building“, the spokesman added, explaining that the fire was put out about half an hour later

It is assumed that the fire is of willful origin. This was reported by investigative sources, cited by the Japanese media, explaining that the flames spread from the fourth floor of the building, where a psychiatric assistance clinic was located

There Police believe a man may have started the flames, then spread quickly in the building located in the Kitashinchi district, populated by bars and night clubs

Milan, fire in the former Covid hotel near the central station

Two and a half years ago, Japan witnessed one of the worst fires since World War II after a man gave fire at a film studio in Kyoto in July 2019, killing 36 people