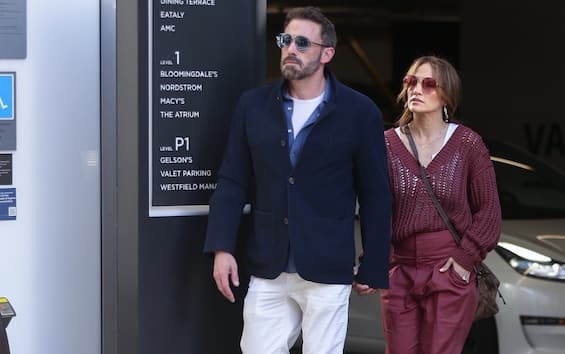 More than a crisis. The love between Jennifer Lopez and Ben Affleck proceeds swimmingly, despite the tabloids from time to time talking about a crisis. This year the couple is celebrating first Christmas as husband and wife: for the occasion, the two organized a huge party in Hollywood, where they offered the guests a romantic duet on the notes of By Christmas Eve by John Legend.

The moment was captured by one of the partygoers, and shows the actor and director starting to sing the song. Affleck earns the laughs of his guests when, slightly struggling to keep up, he orders the pianist to “go slow.” That’s when J. Lo, in a sparkly dress, joins in. “Make a wish, close your eyes and believethe pair sing into the same mic, intoning the final bars of the John Legend track A Legendary Christmas. Then J.Lo wraps Affleck in a tight hug and kiss him. In another video shot at the time, the artist is seen telling guests, “This is my child’s favorite Christmas song.” Jennifer Lopez also sang her hit On the floorwhile guests helped themselves to pizza, hot chocolate and a gingerbread house replica of the couple. Many VIPs present at the event, from Kim Kardashian to Billie Eilish up to Doja Cat.

After being together from 2002 to 2004, and having interrupted the relationship shortly before the wedding, now after twenty years Jennifer Lopez and Ben Affleck have finally crowned their dream of love. During an interview with Zane Lowe of Apple Music 1, the pop star spoke about this surprising backfire. “Twenty years ago I fell in love with the love of my life. I was working on a record called This Is Me…Then. It was about stopping that moment in time. And now, the most amazing and incredible thing that could have happened happened. Now I want to freeze this moment in time again. And now it’s even better than the first time”. He then continued: “Me and Ben don’t say now, ‘Let’s see how it goes.’ No. Now it’s, ‘It’s you and me. That’s all. Until the end'”. Jennifer Lopez then recalled the moment in which, in 2004, the two ended the story. “It was so painful after we broke up. Once we called off our wedding 20 years ago, it was the biggest pain of my life. I honestly felt like I was going to die. She sent me into a spiral for the next eighteen years,” she admitted.