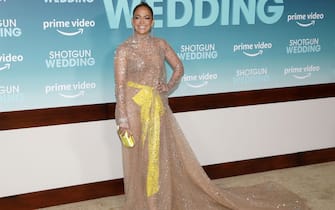 Nude look for Jennifer Lopez, the undisputed star of the Los Angeles premiere of An explosive marriage, Jason Moore’s film streaming on Amazon Prime Video from January 27 and also visible on Sky Q and via the app on the Now Smart Stick. For the event, which took place at the legendary TLC Chinese Theatre, the actress wore a Maison Valentino creation

From Chiara Ferragni to Gigi Hadid, the stars in love with pizza

The dress is a creation with a regal mood with a cape back and wide tail, made with light fabric studded with light. The model enhances Jennifer Lopez’s physicality, emphasizing her waistline with a showy yellow bow, an effective gimmick by the creative director of the Roman fashion house. The bow is coordinated with a clutch bag, by the Tyler Ellis brand

An Explosive Marriage, new trailer for the film with J.Lo and Josh Duhamel

For her looks, Jennifer Lopez relies on the historic stylist Rob Zangardi who takes care of her every public outing and also took care of the wardrobe of the actress’s fairytale wedding with Ben Affleck. On this occasion, Zangardi collaborated with Mariel Haen who also takes care of the image of J.Lo

Jennifer Lopez and Ben Affleck sing together at a Christmas dinner. VIDEO

For the hairstyle, a very tight crop, Jennifer Lopez relied on Andrew Fitzsimons who has already taken care of her hairstyles on other occasions. The star’s nude up is, as always, bright and bronze-toned with gloss lips, a trend Lopez helped create and is now taking over TikTok

Jennifer Lopez loves to choose the dresses for her special appearances themed with the event she is to attend and for An explosive marriagewhere Darcy plays a betrothed to whom all sorts of things happen, opted for a creation that is similar in spirit to a wedding dress

Jennifer Lopez, the new album is inspired by the romance rekindled with Ben Affleck

The actress said she had a lot of fun shooting this film which took place in Boston and the Dominican Republic. The theme of the film has given her the opportunity to return, in interviews, to her wedding (double, two ceremonies held last year) and Lopez has not failed to underline how getting married can be very stressful, something she has experienced herself which, however, in the organization, she was helped by Ben Affleck

Specifically, Jennifer Lopez added that Affleck took care of organizing the wedding in Las Vegas. For the second ceremony, however, the two spouses collaborated together

The mystery of Jennifer Lopez’s blacked out social media

J.Lo is joined at the photocall by Josh Duhamel co-star of An explosive marriage. The American actor plays Tom, Lopez’s partner in the film who intends to take her down the aisle

Duhamel has told in some interviews that he, unlike his character in the film, has not dealt much with his marriage in real life. The actor has been married to model Audra Mari since 2022 and is back from a previous union

The two protagonists of An explosive marriage pose with the director of the film, the American Jason Moore

Moore directed two feature films prior to this last film, Voices (2012) e The perfect sisters (2015). For TV he has directed some episodes of several popular series including Dawson’s Creek And One Tree Hill