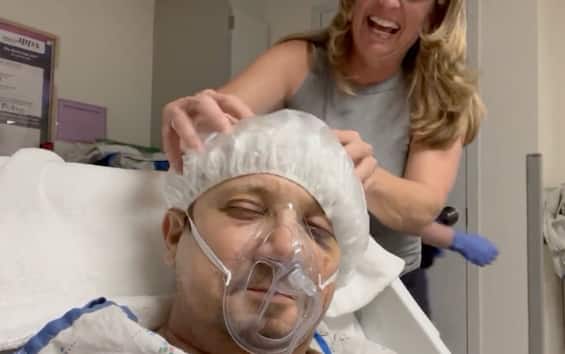 After yesterday’s selfie, Jeremy Renner wanted to reassure his fans again by posting another update from inside the hospital on social media as he recovers from the snowplow accident that left him in serious condition. From his hospital bed, the actor posted a video (made by himself). The star, known to audiences as Hawkeye in the Marvel Universe, has a swollen closed eye and wears an oxygen mask, but appears in high spirits as her sister scrubs his scalp. The video is accompanied by the message: “A not so great day in the ICU turned into a great spa day with my sister and mum. A thousand thanks.”

The accident involving Renner occurred on Jan. 1 after the actor tried to help remove a family member’s car by unclogging it from snow. The actor’s snowplow ended up running him over and seriously injuring him. Renner underwent two surgeries the next day after sustaining blunt chest trauma and orthopedic injuries. In a Jan. 2 press statement, Renner’s family said they wanted to “express gratitude to the incredible doctors and nurses who care for him.”

The support of colleagues

As Variety recalls, as a member of the Marvel Cinematic Universe, where he played Hawkeye for over a decade, Renner has received a great deal of support from his Avengers co-stars. Chris Evans, Chris Hemsworth, the Russo brothers, Chris Pratt and others sent Renner well wishes on social media after his accident.