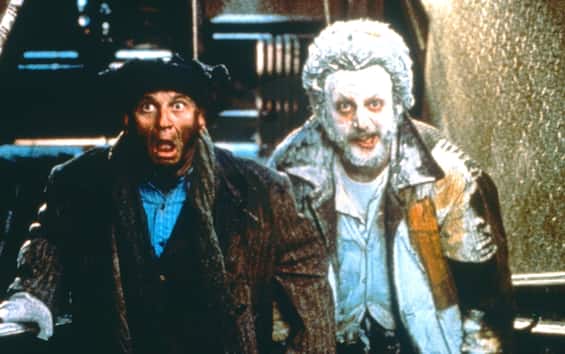 The jet of the blowtorch, lurking behind the door, roasts Harry’s hatone half of the bungling thieves duo of Mom, I missed my plane: I got lost in New York who with clumsy ploys tries to ruin Kevin McCallister’s Christmas (Macaulay Calkin), lost by family on vacation in Florida on a flight to the Big Apple. In the interview given to People to celebrate the thirtieth anniversary of the cinematic cult of the nineties, Joe Pesci recalled the “demanding” physical comedy that, before the comforting dip in the toilet, set Harry’s head on fire: “Besides the expected bumps, bruises and general aches you’d associate with that particular kind of physical humor, I suffered severe burns on the top of my head during the scene where Harry’s hat is set on fire. I was lucky enough to have professional stuntmen doing the real heavy stunts.” In the film Harry and his fellow thief Marv (Daniel Stern) glide on rivers of detergent, fly down stairs, get shocked and hopelessly dodge paint cans and mechanic’s tools concocted by little Kevin.

MOM, I MISSED THE PLANE

In the interview Pesci also told of relationship with Caulkin, then Hollywood child prodigy: “I remember Macaulay as a really sweet kid and, even at his age, very professional. I intentionally limited my interactions with him to preserve the dynamic between his character Kevin and my character Harry. I didn’t want it to appear on the screen that we were somehow friendly. I wanted to maintain the integrity of the conflictual relationship”. On the possible return to the screens of a third episode from Mom I missed the planePesci went on to say, “While you can never tell, I think it would be hard to replicate not only the success but the overall innocence of the originals. Now is a different time; attitudes and priorities have changed in thirty years”.