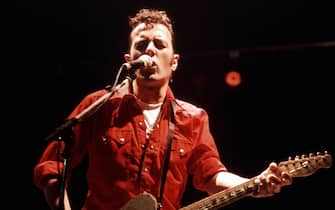 Twenty years without the genius of Joe Strummer. The singer (and guitarist), leader, voice and author of the Clash (along with Mick Jones) and then Gods Mescaleros died at Broomfield on December 22, 2002. Died of a heart attack, he was 50 years old. From the beginning to the success, here are all the curiosities about the British artist

The Clash, 45 years ago the first album came out: everything you need to know about the record

John Graham Mellor, this is his name in the registry office, was born on August 21, 1952 in Ankara in Turkey. Son of a diplomat and a nurse, due to his father’s work transfers, he grew up in various countries of the world until his definitive return to England at age 9. In the school period he falls in love with music, inspired above all by Who and Rolling Stones. Then he approaches the blues and R’n’B. His passion for literature reveals a talent also for writing texts (in his photo a performance from the early 70s)

Goodbye Keith Levene, the founder of the Clash was 65 years old

After his brother David’s suicide in 1970, he moved to the Central School of Art and Design in London. And in these years he starts playing on the London streets. He is renamed Woody in honor of Woody Guthrie. He becomes the singer of Flaming Youth (later renamed Vultures). During this time, he also works as undertaker in a cemetery

In 1974, the group broke up and Strummer returned to London, trying his hand as Street artist. He forms another band with some other squatters: i 101’ers they achieve good local success in the city. In 1975 he stopped calling himself Woody Mellor giving himself the stage name Joe Strummer (literally “strummer”), a self-deprecating way of admitting his poor musical technique in playing the guitar

It imposes itself as frontman just as punk is emerging in the British capital. The still unknown Sex Pistols they open a concert of his band and Strummer is struck by it. He is then contacted by Mick Jonesof London SS, who offers him to become the lead singer of his group. Strummer acceptsleaving the 101’ers

Sex Pistols, 45 years ago Never Mind the Bollocks came out: things to know about the album

The bassist is also in the new band Paul Simonon which changes the name to The Clash. In early 1977 the group signs a contract with CBS Records and is completed with the arrival of Topper Headon as a drummer. From here begins the legendary climb to global success. The first album, the homonymous The Clashcomes out a few months later and becomes one of the cornerstones of British punk (with iconic anthems such as White Riot and London’s Burning)

In 1978 it comes out Give ‘Em Enough Rope and the year after London Callingthe band’s masterpiece and unattainable mix of musical genres, from reggae mixes to rockabilly. Success is overflowingeven in the US. And it is followed in 1980 by the triple album Sandinista!. The last album of the complete band is Combat Rock (in 1982) while Cut the Crap will be released in 1985 with a different training and it will turn out to be a fiasco

During his time with the Clash, Strummer and his bandmates, they get into trouble with the law several times. On June 10, 1977, he and Headon were arrested for spray painting the band’s name on a hotel wall. May 20, 1980 comes arrested for hitting a person with his guitar harassment of the audience during a concert in Hamburg

Before the album’s release Combat RockStrummer disappears and for some time loses its traces. What is certain is that in April of that year he runs the Paris marathon (later he will declare that his training regimen consisted of 10 pints of beer the night before the race)

But the band stands bursting, in particular for the differences between Strummer and Mick Jones, the two souls of the group. Before Headon is removedstruggling with a strong heroin addiction, and then with the infamous “Clash Communique” Jones himself is ousted in 1983, effectively causing the end of the musical project, then made official in 1985 with the dissolution

In the following years Strummer collaborates with Mick Jones and his new lineup, Big Audio Dynamite. And he often works with i Pogues. He is also dedicated to cinemaas the author of soundtracks and as an actor. Particularly noteworthy is his participation in Mystery Trains by Jarmusch (pictured) in which he plays a drunken and cantankerous drifter named Johnny. In 1989 he published his first solo album, Earthquake Weatherpassed almost unnoticed by audiences and critics

In 1995, however, he formed his new band, Joe Strummer & The Mescaleros, which marks one artistic renaissance. There are three albums released (the last posthumously). Unforgettable at this stage remains a splendid version of Redemption Song by Bob Marley, covered both with the Mescaleros and in a duet with Johnny Cash

As for the private lifeIn 1975, Strummer accepted £100 to marry a South African woman and give her British citizenship. In 1978 he met Gaby Salter with whom he had a 14-year relationship. The couple had two children, Jazz and Lola, but never married. Finally, in 1993, her love story with Lucinda Tait began, to whom he was married from 1995 until his death

On December 22, 2002, Strummer comes found dead by his wife at his home in Broomfield, Somerset at the age of 50 years old, just returned from a walk with his dog. An autopsy showed he died of a heart attack caused by an undiagnosed congenital heart defect

Socialist convinced, Strummer has become vegetarian in 1971 and remained so throughout the rest of his life. Throughout his career he has written about social decay, unemployment, racism, police brutality, political and social repression, and militarism. He has been promoter and supporter of campaigns such as the Anti-Nazi League, Rock Against Racism and the Rock Against the Rich concert series organized by the anarchist organization Class War