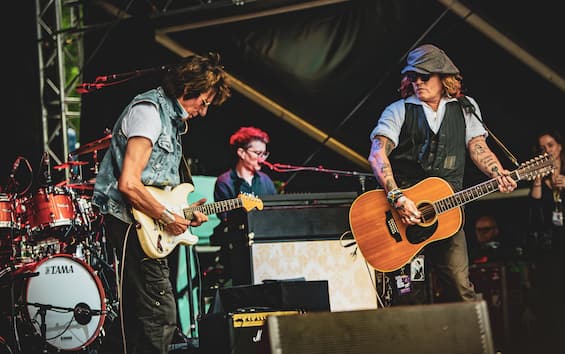 There is no peace for Johnny Depp: after the legal adventure of the long and intense libel trial against ex-wife Amber Heard, now (perhaps) trouble is back for the star.

The actor and musician has recently reopened a profitable and intense musical interlude, collaborating with his friend, the legendary English guitarist Jeff Beck. The latter, 78, is one of the historic members of the Yardbirds band.
Last month he released an album titled “18” with Depp, 59.
And so far so good, very well indeed, complete with a tour of Beck’s Europe whose dates – whenever there were rumors of Depp’s presence on stage – immediately recorded sold out. But in the last few hours it comes from overseas with news that it really didn’t take place, for Depp and for his loyal fans: now he and Jeff Beck are accused of stealing the lyrics of a song from a prisoner. It would be a poem that an inmate wrote decades ago.

“Actor Johnny Depp and British guitar god Jeff Beck have been accused of plagiarizing a poem recited by an inmate decades ago,” writes Jesse O’Neill on New York Post.

The two are accused of having taken part of the lyrics of their song “Sad Motherf *** in ‘Parade” from a 70s song titled “Hobo Ben”.

One of the tracks on the record features Depp apparently uttering the same lines that were recited by a murderer and robber sentenced to prison in 1964, named Slim Wilson in 1964.
The US edition of Rolling Stonethe first newspaper to have supported this thesis: just RS he became a spokesman, collecting the words of the accusers (which we will present to you shortly).
“The Depp-Beck couple’s song is Sad Motherf *** in ‘Parade and it’s a kind of spoken word, a song more recited than sung. Part of the text would be taken from Hobo Bena toast (a typically Afro-American musical narrative forerunner of rap) that a half-stranded inmate recorded under the pseudonym Slim Wilson in 1976 on the album Get Your Ass in the Water and Swim Like Me, after being discovered in a Missouri prison by folklore scholar Bruce Jackson. The text had been included two years earlier in Jackson’s always titled book Get Your Ass in the Water and Swim Like Me”, Reads the website of Rolling Stone Italy (which takes up the news of RS USA).

The prisoner to whom the text perhaps belongs

Slim Wilson – whose real name was Willie Davis – “was a pimp […] and a gambling cheat who recited a series of obscene poems, ”writes the NYP in an article published in these hours.

His poems were recorded by American folklore expert Bruce Jackson while Wilson was serving his sentence in the Missouri State Penitentiary, he reports. Rolling Stone USA. These poems were called “toasts”. Jackson is a professor of American Culture at the University of Buffalo.

Bruce Jackson recorded Wilson reciting a “toast” (aka toast) called “Hobo Ben” and included a transcript of the piece in his 1974 book, “Get Your Ass in The Water and Swim Like Me”.

“The lines of ‘Hobo Ben’ have reappeared almost verbatim in the new experimental song by Depp and Beck, Sad Mother **** n ‘Parade”Continues Jesse O’Neill of the NYP, noting that the two are the only names to appear in the credits of the texts.

Bruce Jackson was asked by RS

Folklorist Bruce Jackson turned to the “Bible of Rock”, that is Rolling Stonefor its j’accuse.

His words were: “The only two bars I could find in the whole piece to which [Depp e Beck] contributed are ‘Big time motherf ** r’ and ‘Bust it down to my level’, ”Jackson told a Rolling Stone. “Everything else comes from Slim’s performance in my book.” And he adds baffled: “I’ve never seen anything like it. I have been publishing material for 50 years, and this is the first time anyone has simply ripped something off and put their name on. “

Jackson’s son – Michael Lee Jackson (brilliant name for your son if your surname is Jackson, grant it) – is a music and intellectual property attorney, as he explains. RS.

“They don’t reflect the actual authorship of those lyrics,” explained Michael Lee Jackson. “It’s simply not plausible, in my opinion, that Johnny Depp or anyone else could have sat down and made those lyrics without taking them almost entirely from some version of my father’s recording and / or the book they appeared in,” added Michael Jackson. .

The lawyer is reportedly considering filing a lawsuit against the “Pirates of the Caribbean” actor and “Going Down” guitarist. However, such an action is not so safe to undertake, as “Hobo Ben” is part of an oral tradition and did not have a definitive author, according to what the magazine itself adds. RS.

More an ethical question than a legal one?

“I don’t know if this record is selling. I’ve seen some reviews that I would be very embarrassed if they were related to my album. But if he’s selling, Johnny Depp is making a lot of money. Should he go to him, or should he go somewhere that helps the people who produced this culture? ”, This is the question (rhetoric of course) posed by American folklore professor Bruce Jackson.

However, Jackson – an ethical question or not – is now exploring with his son what legal options are available to them. “The discovery does not necessarily give rise to a cause: Hobo Ben it does not have a precise author. Slim, whose real name is not even known, told Jackson that he had learned the toast from his father and therefore could be a piece belonging to the popular tradition. But it is true that Jackson owns the rights to the transcripts of the book and the record Get Your Ass in the Water and Swim Like Me”, They write about Rolling Stone. The music magazine makes it known that it has requested a comment from the representatives of Beck and Depp but for now nothing has been announced yet on the front of the counterpart of what could be an alleged plagiarism. We’ll see, for now let’s keep listening (the music).